Answer: “Beats the shit outa me!”  On another note, this is the name of a new reading series in Troy at the Psychedelicatessen, a bagel place on River St., a few doors from the Arts Center. We were in a comfy side room with sofas, soft chairs, a nice gathering place, but awkward for an open mic. There was a lot of noise coming from the kitchen, & with the poets & listeners scattered about the room without a mic & amp the poets’ words were sometimes lost. But we persisted. 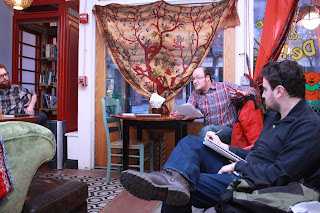 Avery Stempel, our host, started us off with a reading of Dylan’s “Subterranean Homesick Blues.” There was no “sign-up” sheet per se, Avery would call on poets by their first names going around the room in a roughly clockwise manner. The first reader was Clarese who was seated at a table with a laptop facing away from the room which made it difficult to tell what she was reading, but I think the second piece titled “A Jar of Sunshine” was called a “fairy tale,” & by itself was over the 5-minute limit that Avery had established. Brianna followed with a joyful, descriptive piece “The Thing About Spring” (is that it is followed by Summer). James read 3 short pieces (that he had trouble finding on his phone, the digital version of riffling through a folder of poems), his pieces about a “traveling Time salesman," another about being a jelly bean in bag of jelly beans, & the last about a plot to eliminate people with Lyme disease.

Daniel read a couple pieces that were strings of random, philosophical thoughts about the internet & nearly everything else. Avery read a couple of pieces from a long-distance role-playing writing game about characters caught in dreams that he’s doing with a friend, the first in rhyme, “Deeper into Dream,” then one titled “Awakening from the Dream.” Dale also extended the time limit with a string of pieces that included a poem Avery had sent him last night, & a lullaby for his daughter that he sang, dangerously close to putting me to sleep. Desmond picked up on Avery’s introduction & recited Dylan’s “The Times are A-Changin’” then read a poem based on the movie series The Lord of the Rings (not necessarily on the books by the same title), then a piece on food & love “A Cuban Love Song.” I read 2 poems for recent anniversaries, “Baghdad/Albany” for the 15th anniversary of the (ongoing) invasion of Iraq, & “for Hugh Thompson Jr.” for the 50th anniversary of the My Lai massacre in Viet Nam. 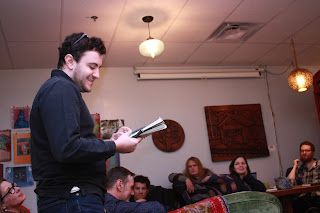 Mike read a couple of philosophical musings, the first in which he said he was trying to “artify”  own words, then one titled “No Faith in Imagination” in which he observed museum goers using cameras to capture paintings for their memories.

This was the second in a planned monthly series at the Psychedelicatessen, 275 River St., Troy, on the third Wednesday of the month. However, Avery announced that in deference to the Albany WordFest during the third week in April that he would not have an open mic that month but that it would pick up again in May, to continue to ponder “What is Poetry?”
Posted by DWx at 7:14 PM