This was a double-header event for a chance to meet, talk with & listen to, former Albanyan Joachim Frank, who in 2017 shared the Nobel Prize in Chemistry. Dr. Frank was a long-time UAlbany faculty member in the Department of Biomedical Sciences; he is a physicist by training, but a long-time writer of fiction & poetry. During his decades in Albany, Joachim was a president of the Hudson Valley Writers Guild, & read at open mics, the Readings Against the End of the World & at poetry readings protesting both Gulf Wars.

During the afternoon, there was a “conversation about a life in the arts and sciences” held in the D’Ambra Auditorium in the Life Sciences Research Building on the UAlbany campus. Most of the questions centered around the perceived, or real, conflict between Joachim’s creative writing & his scientific research, & around the different ways of writing in each field. He was a bit flustered at one questioner's use of the acronym “STEM,” a term prevalent at least in this area including on one area TV station. I thought, perhaps we should have less S.T.E.M. (i.e., Science, Technology, Engineering, Math) & more C.R.A.P. (Creativity, Reading, Arts, Performance). 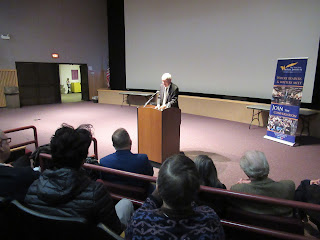 Later in the evening Joachim Frank read from his fiction at the Huxley Theatre at the NYS Museum Cultural Education Center, downtown. Both events were moderated by NYS Writers Institute Director Paul Grondahl. The audience was a diverse group of Joachim’s Albany friends, UAlbany luminaries & colleagues, & community writers.

At Paul’s request Joachim began with a readings of his poem “Central Ave.,” a poetic walk up that iconic Albany street, written in 1978, 3 years after he arrived here. Then on to a short story inspired by the Exxon-Valdez oil spill, “Metamorphosis of an Executive,” in which the chairman of Exxon Corporation is tossed into the oil spill then rescued & cleaned up like one of the fish. The short story “Myopia, or the Chest of Drawers” was a Beckett-like conversation about a manuscript between 2 friends in a cafe.  Joachim said he has written 3 unpublished novels & read an excerpt from one titled “Observatory” about an astro-physicist, his family & others being soaked in radioactive rain from Chernobyl.

Again, he answered questions about writing & being a Nobel laureate in the sciences. At one point he discussed his efforts in his scientific writing to use metaphor as a way to illustrate or clarify the dense scientific concepts about which he was writing. Makes me curious to read one of those articles.

If you are not aware of the ongoing, mostly free, events of the NYS Writers Institute, you can visit their website to see their schedule & can sign up for their email newsletter.
Posted by DWx at 1:02 PM