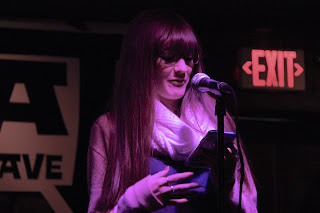 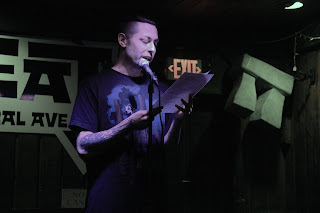 Brass Tacks is now at The Low Beat once a month on the third Tuesday, sign up begins at 7:00PM, open mic at 7:30PM. Check the calendar at AlbanyPoets.com.
Posted by DWx at 5:22 PM No comments:


2nd Sunday of the 2nd month, back at the Arts Center, still drawing people out on a Sunday afternoon. The hosts are Nancy Klepsch & me.

& I was first on the sign-up sheet, read 2 recent poems from a productive January, “Hanging Over the Edge” about my recent stay in Gloucester, & my annual birthday poem, this on my blessings. Tara Kistler read here last month, was back with a Haiku “The data,” & a villanelle “Wild Things” (“… all things crumble”). Dave DeVries hosts the open mic on the third Tuesday at the Colonie Town Library & read a poem about a word he doesn’t like “Possibly,” & one titled “Unclaimed Baggage” a philosophical metaphor.

Bob Sharkey’s first poem was “When Everything Became a Teacher” the title drawn from Dineen Carta’s book Rumi’s Daughter (2019), then an ever-evolving poem of facts & disasters with the recurring line “They say…” Tim Verhaegen read a long memoir-essay “Falling in Love at First Sight” about how an early infatuation can persist for years. A new voice, in rhyme, was Meg Waldron who characterized her first, stream-of-consciousness piece as “nonsense” but it was fun, her second piece was about finding herself “Orange.” Always colorful Peggy LeGee read one piece from her notebook “I’m Stuck in Peggy’s Prison” a poem of affirmation using the trope of someone with another person of another gender trying to get out, & using the language & images of prisons.

My co-host, Nancy Klepsch, said she was unsure of the title of her piece & so didn’t say it, tapped her foot in time, about lesbians. Karen Fabiane’s first poem, titled “Seems Like Now” was a stream-of-consciousness ramble that began with a bath, then a similar piece that began with a childhood memory of Pin-the-tail-on-the-donkey “Karen’s Steak & Chops.” Anne Rokeach read selections from a memoir, the first titled “Sounds of Silence” about a deaf sibling learning words, the second titled “For Her” about her mother-in-law. 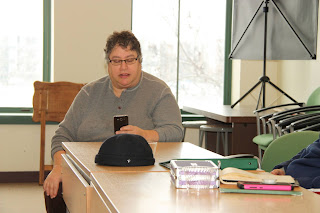 A surprise today was the last reader, who is here almost every time we meet but doesn’t read, Lauren Pinsley, who read a wistful/sad piece on waiting “In the Fullness of Time,” then a Haiku on “beautiful chaos” — she should read every time.


15th Annual Tom Nattell Memorial & Beret Toss began with the beret toss at the Robert Burns statue in Albany’s Washington Park with a successful toss by Mary Panza on here first try. Also in attendance, besides “yours truly,” were Nick Bisanz & Tess Lecuyer. The candle had been lit, the site smudged with sage, the flowers presented & the annual complaint originally uttered by Mary some other cold January, “Hey Tom, the next time you die, could you do it in July.”

Then on to McGeary’s for some bourbon, meatloaf & beer. And poetry.

I served as host & Tom’s words were shared throughout the open mic, including selections of the Christopher Columbus Fantasies (1992) & “American Pledge” from 2000 Human Ri(gh)t(e)s (2000). In a true sense Tom Nattell was tonight’s featured poet. The fact that this open mic is held monthly on the last Monday of the month (& has been since January, 2005) is a tribute itself to the spirit that is Tom who got the Albany poetry scene going with a good swift kick in the ass.

First on the sign-up sheet was a welcome regular here Carrie C. who read “A Walk on my Path” combining images of mythological warfare with real forest creatures, then a poem based on a short story of love she wrote when she was younger. Tim Verhaegen is known for his memoir pieces & tonight read 2, “The Circles & Hook Pond” about where he grew up, & “Best Friends at First Sight at a Party.” 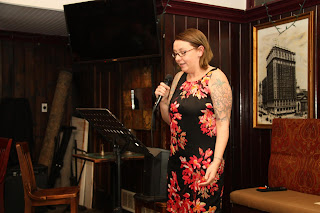 Jacky Kirkpatrick hadn’t been here in a while & read a confession with a long title “You Were Right I Didn’t Need my MFA I Just Needed to Fall in Love” (with a wink to my attitude about MFA programs), & the simply titled “Sustenances.”  Joe Krausman, another regular here & everywhere, read a couple of his laconic musings on relationships & aging, “Cheering Someone Up,” & the very useful “How to Have Great Sex at 90.” Speaking of sex, I stepped in with an old poem “To My Penis, on our 45th Birthday.” 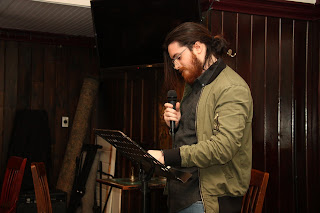 A new face & voice here — which is the essence of what Tom Nattell did with the open mics & readings he organized — Conor Meehan read a couple of “J” poems: “Judas” & “Joker.” Joshua Bauscher frequently attends the weekly open mic in Troy, Poetic Vibe, & here tonight did a couple of Slam-style pieces from memory the first about a love never had, then from his book a musical play on sounds beginning with “A Fire tree…” Julie Lomoe took us down memory lane, with a ramble about her best-selling posters of promoting the paintings she exhibited at the 1969 Woodstock Festival, then read her poem about Tom Nattell’s last reading in December 2004 at the Lark St. Bookstore.

Tess Lecuyer who was one of those on the scene at those early QE2 open mics that Tom organized began with a mean sonnet “December Ends,” then one based on an actual conversation “The Widow.” Amanda Pelletier read here in the past at another Tom Nattell Memorial in 2018, & more recently at The Low Beat, tonight reprised her Family Guy piece written to a former lover read just a week ago, then an audience participation piece titled “Share” addressed to her father. 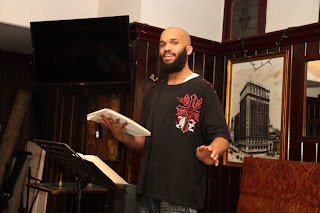 Austin Houston had also been here in the past & who is not from Texas, read a piece about being mistreated at work, then a manifesto about the importance of being himself/his own person. Glenn Cassidy, who will be the featured poet here in February, read “In Men We Trust” on Trump’s impeachment, then a take on Tim O’Brien’s book The Things They Carried, but this about what immigrants bring with them when they seek asylum & a new home.

I had begun the night with one a poem about Tom Nattell’s death “Theology 101” & ended with my elegy & memoir “Chasing Tom.” It was the kind of poetry open mic that Tom would have, I’m sure, felt was a success on one of his nights at the QE2. & the generous donations from the poets & audience tonight are going to the Homeless Action Committee.

Poets Speak Loud! happens each last Monday of the month at McGeary’s at Sheridan Square in Albany, NY, sign-up at 7:30PM, plenty of good food & adult beverages efficiently served by Mark & others. Details at AlbanyPoets.com.
Posted by DWx at 9:51 PM No comments: