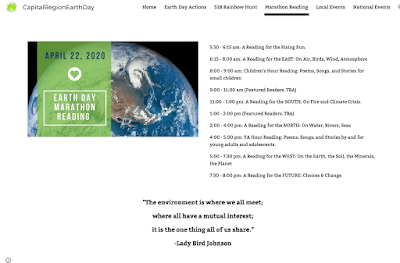 This was the first "virtual" real-time open mic that I've attended; I've submitted recordings of myself reading for the AlbanyPoets.com project & to Charlie Rossiter's Poetry Spoken Here podcast.  But this was different.  Like most things in life we dread, this wasn’t as bad as I anticipated. Although I recently was in a Zoom.com gathering for a family happy hour, I’ve avoided these type of things for the poetry gatherings I love. But this was put together by my friend Karen Schoemer & folks at the Roeliff Jansen Community Library down in Hillsdale, NY & I felt it was neutral ground to test it out. Besides, I’ve been playing around with the Zoom app & wanted to use some of its playful features, like the virtual backgrounds. At the most crowded there were 18 people in attendance (Zoom told me that), & 14 readers (by my count). I could even “take pictures” using the computer’s screenshot feature.

This was actually the Library’s traditional NaPoMo annual open mic, & as I noted, the first time I’d had a martini at an open mic “in” a Library. Tamara Gaskill from the Library served as the technical moderator, which became apparent is a good thing to have to mute the audience, unmute the reader, & take care of other technical issues.

Our host, Karen Schoemer, was apparently keeping her own “sign-up sheet” & broke the ice with a bunch of her poems from a recording project she has been working on, beginning with a series of similes titled “It’s Hard to Say Exactly How I Feel;” most of her poems were piles of descriptive images, such as the one with the great title “Zen Real Estate Broker.” As you would expect at this library out in the country there were a great deal of “Nature poems.” Jennifer Anderson read poems by other poets such as Archibald MacLeash, & her own poem about goldfinches, “Yellow For Gold;" at the end of the open mic she came back with a poem about canoeing “Rams Horn Creek.” 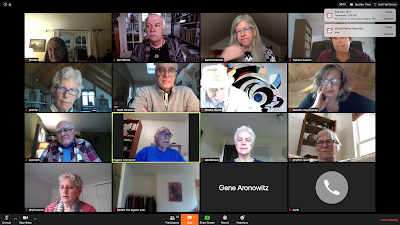 Eugene Aronowitz read a couple of short personal essays (I’m not sure where the line breaks were), “Stranger” about a jukebox battle with his daughter in a diner, & the pensive chronology “I Am Among the Formerly Young.” Jason showed up with his plush hand puppet, Frankie the Pigeon Poet, who performed “Shelter in Place” (with the plaintive anxiety “to get back to the dance”), then Jason followed with a rhymer “I Don’t Know.”

Charles Elkind used the Zoom virtual background to put up one of his paintings as a background to read a trio of serious philosophical musings, one with the improbable title “The Compassionate Impracticality of Equanimity.” Phyllis Carito read a poem about using isolation to stay in bed “Morning” then one about apple orchards “Barely Spring.”

Frances Colombo had to look for her poem on her Mac book, a variation on the poet shuffling papers when it is their turn & read a short poem about celebrating her birthday. Joan Binzen read poems by Jack Gilbert & Czeslaw Milosz, with her own poem on silence “There Was No Plan Leaving the City” sandwiched in the middle.

I was glad to see that Cecele Kraus had joined us & she shared 2 poems, “Future Thoughts” written this Winter on the theme of Time, & a more recent piece “Out of Bounds." I followed, switched my virtual background to a shot of Wonson Cove in East Gloucester to read 2 poems written there “Hanging Over the Edge” & “The 6 of Cups.”

Todd Johnson began with a pastiche of William Shakespeare’s famous Sonnet 18 (“Shall I compare thee to …”) but his version was a negative complaint, then another piece on the cosmic show of flowers, & the last about his profession as a teacher. Daniella Van Gennep read a poem about conversations with her daughter over the years where the daughter would ask for something then get something else, & another poem about being an immigrant (from the Netherlands).

Al Stumph said he was reading his own poems because he is his own favorite poet, read “Spring Walk” & a poem written in Florida about missing his home here “Night Lights.” Phyllis (who was identified by Zoom by her iPad) read “Daffodils & Cat in the Pandemic.”

A few thoughts about the Zoom experience: it was handy to have the app note the participants’ names rather than me tracking down the sign-up sheet at the end; the “spotlight” feature which shows the speaker/reader in the center of the screen makes it almost like focusing on the reader at the mic; & the “mute” feature would be good to have for regular open mics to tune out the tedious (but the downside is the audience reactions — laughter, sighs, those indescribable sounds of appreciation at a line or phrase, & most of all applause — are not there to encourage the reader). This is certainly not the way I want to be with my poetry community, & as I started out by saying “this wasn’t as bad as I anticipated” but that doesn’t mean it’s a good idea, it’s not — it SUCKS!  & where was the waiter when I needed another drink?
Posted by DWx at 7:30 PM No comments: