The Adirondack Center for Writing, that operates out of space at Paul Smith's College has an annual of readings in the summer in North Country venues. I made the trip up to Saratoga Springs to the Arts Center on Broadway to hear once again one of my favorite poets, Mary Kathryn Jablonski, & novelist Rob Cohen. It was a helpful reminder of why I avoid that town in August: the streets filled with wealthy tourists & that means their cars too. They even charge in the usually free municipal lots. Circling around I found my "secret" spot on Phila St. & made it to the center just as Nathalie Thill, the Executive Director was introducing Mary Kathryn.

She did a well-orchestrated reading of her "greatest hits," published poems & crowd pleasers. She began with the first poem in her chapbook, To the Husband I Have Not Yet Met (A.P.D., 2008), "Mare Vaporum," then the recently published "Kabuki." "Stone" about her father & the farm where she grew up. "Praesepe," (a star cluster in Cancer, the Crab) published in Beloit Poetry Journal, as was her final poem, "The Heart Nebula". In between she also included some of her popular letters "To the Husband I Have Not Yet Met." Always a pleasure to hear her read; regrettably there is no picture. 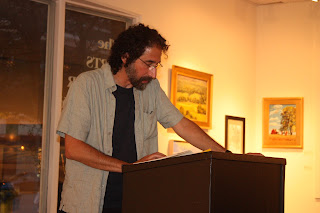 Rob Cohen read from his new novel, Amateur Barbarians (Simon & Schuster) a section set in Africa. Prose readings are tough, trying the readers endurance & patience, usually thrown into the middle of the story. His writing was clear & direct & the episodes he described were vivid, with a touch of humor.

Look for these free events next summer in North Country venues.
Posted by DWx at 1:34 PM 3 comments:

A hot & steamy night, but it's never too hot or too steamy for poetry, as our poets gathered from north & south.

After we invoked the muse of Denise Levertov, the open mic began with Sally Rhoades, being very much a nurse, "The Deafening Silence". Bob Sharkey's "Memoir for Poor Mary" was his grandmother's story. Terry Zacuto (Bat-Sonja) had to borrow glasses to struggle to read her poem in MySpace-small-print "Just Black" (which is also on her FaceBook page if you want to find it).

Even the elusive Mary Kathryn Jablonski was here tonight to honor her friend Georganna & coincidentally ended up in a mini-grouping of poets published by A.P.D. Mary read her meditative poem "Multiplication." The second A.P.D. poet, Anthony Bernini, read "Not Alone." 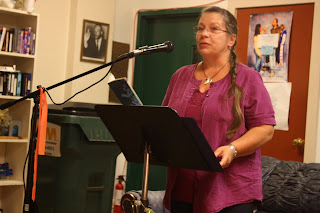 Georganna Millman, the featured poet, began with poems from her recently published Formulary (the winner of the 2008 poetry prize from Astounding Beauty Ruffian Press): "Apothecary," "Alchemy," "Painting Swastikas," "The Happy Drawer," "Pharmacognosy," & "Lobotomized." As she described it, her "day to day life is contained in this book". Her new poems contained some on the theme from her book, "Pharmacist's Lament," & "Side Affects," & some nature poems, "Seduction" (a green heron), "Marriage" (a love poem to her husband, also about a green heron), then the brand-new "Boys," & the honorably mentioned "Hearing Voices."

I read a 10-year-old poem recently re-written, "Thru the Circle," inner space vs. outer space. Moses Kash III contained about 5 pages of his life in his poem "Whereas". I think Alan Casline's introduction was longer than his poem "Seed of Vision." W.D. Clarke's poem told the story of "The Bear." Thomas Brinson calls his memory prose poems "poemoirs" & read one about seeing a woman in Woodstock wearing a second-hand "Pleiku Jacket," bringing back memories of Viet Nam.

Every third Thursday at the Social Justice Center, 33 Central Ave., Albany at 7:30 PM -- come hear the featured poet & bring a poem of your own to read.
Posted by DWx at 7:36 PM 4 comments:

Live from the Living Room, August 12

Our host, Don Levy, invited a prose writer (!) as the featured "poet" tonight, & there were a handful of open mic poets to read & comment.


I first heard Amy Halloran read back in April 1988 at the QE2 on Central Ave. in Albany. This was before the last Monday series had started (the black & white shot). Her first short, short story, fresh from the Port Townsend Writing Workshop, involved a worker releasing butterflies from a lab. The next, & longer, story was a conversation with the narrator's sister, talking about firewood, uneaten food, neighborhood thugs & implied sex, a wonderful, oblique narrative that elicited a round of comments. This is something that happens here in the intimate setting of the living room. 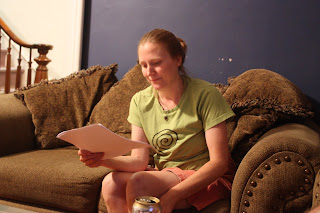 I read my recently revised "Thru the Circle" (here on the Blog) then the very new "Respect." Bob Sharkey read "Summer Styles" about the Woodstock wanna-beens (as we approach the 40th anniversary), and one about the suitcase project, written in "The Yellow Notebook."

A pleasant round of poems, poetic prose & comments, something you can find at the Gay & Lesbian Community Center, Albany, NY, on the 2nd Wednesday of each month, at 7:30PM.
Posted by DWx at 11:32 PM 6 comments:

I stare at the computer screen
at an abstract mandala pulsing in the night
the core of a galaxy seen from the Hubble Space telescope
at the center a slightly oval circle, the white light
fading from the disappearing center
dark swirls & tendrils spin out
to the jeweled rim, blue & lavender & magenta light
a dinner ring of stars fading into the black horizon of space.

I watch the live TV image of my own inner space
for a brief moment before the morning cocktail hits the main line
the shining, clear pink walls, traced with the filigree of capillaries
moving constantly towards that open space ahead
the core of my own expanding river of stars.
It was only a movie until the cramps, the oblivion cocktail
then a place more peaceful, more empty than sleep
neither space nor infinity nor eternity
not even the lost memory of dreams
like the place before birth, that time after death
not even white light in the center of the circle.
Posted by DWx at 6:50 AM 7 comments:

There were only a few of us, including the featured poet, Rebecca Schumejda, gathered around the table with our host, Mary Panza, as the hour approached for the open mic, when the legendary Tour Bus arrived & plenty of poets streamed in.

Alan Catlin stepped boldly up first with a poem about "Climbers," a curious custom where people get into coffins with the dead, then another on a recent news story out of Schenectady, "Burning Amy." I read 2 poems for August, "And the Mary Lou Whitney you Rode in On..." & Tom Nattell's "Hiroshima." Don Levy's poem said, "If The School Bus is a Rockin' Don't Come a Knockin'," then read his new poem about a complaint someone made about his open mic at the GLCC, "The Poets Are Swearing..." Cheryl Rice paid tribute to the Walt Whitman birthday reading in May in "Song of Washington Park" -- thank you. 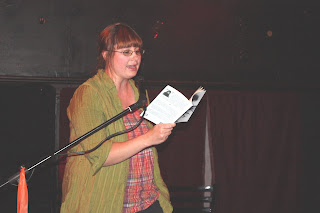 Kingston (NY) poet Rebecca Schumejda was the night's featured reader & began with a couple love poems to her husband from her 2008 book of poems, Falling Forward (Sunnyoutside). Then she turned to poems from a new collection, currently titled "Cadillac Men," about her experience owning a pool hall with her husband. The poems focus on vignettes about various "imaginary" characters who frequent such places, such as Mikey Meatball ("Table of Truth"), an ex-con called Aristotle ("Sober on a Snowy Day" & "Equestrian in the Car"), & Dee ("Going Out for Ice Cream"). Also, "These Men," "The Table Swallows Willy the Whale," "Pool Time," "Just Another Sunday Afternoon," & "Ten Winters & Counting." She racked them up & then ran the table. I'm looking forward to this book.

Joe Hollander's rambling "Certain Wind Directions Changes Not Written on the St. Lawrence" included the names of towns along the Seaway & ideas like Time is short, thinking is fun -- & so was the poem. Ford McLain read "Discipline" from his chapbook Antietam, then something based on a film script he is writing. Chris Brabham read 2 particular favorites of his (& ours), "Medicine Cabinet Junkie" & "That Ass of Hers," & later mentioned to me that he & Sabrina would be moving to Florida -- we will miss his booming presence.

Ed Rinaldi read a couple of morning bird poems, one with sea birds, the other with a crow. Shannon Shoemaker's "Poem for an Open Mic" was just written today, then she described, for those of us who are pop-culture challenged, what are "Emo Boys." RM Engelhardt's "Catharsis in 4 Parts" was another of his angst-ridden poems to a woman, his defense being writing, as he said, "this is what I do best..." You can find the poems Dominick Rizzo read, "The Coffin is Waiting" & "May I" in his book, The Spiral Staircase of My Life." 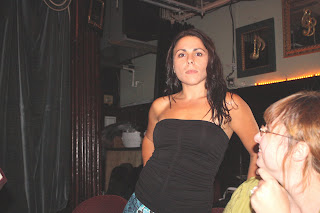 Then we paid our tabs, kissed our fabulous waitress, Nicole, good-bye (I wish!) & were on our way to write more poems to read back here again at Tess' Lark Tavern on the last Monday of each month, starting somewhere in the vicinity of 7:30/8:00. Come early & have dinner.
Posted by DWx at 4:27 PM 4 comments:

THE BREASTS OF SQUEAKY FROMME AWAIT BEHIND BARS

(I just read in the news that Lynette "Squeaky" Fromme is to be released from Federal prison on August 16, after serving more than 30 years behind bars for the attempted assassination of President Gerald Ford. This poem was published in Post Traumatic Press 2007: poems by veterans.)

THE BREASTS OF SQUEAKY FROMME AWAIT BEHIND BARS

like those high school girls of my past
no longer too cute & perky
now as old as I am
heavier, thicker around the waist
-- if still alive
perhaps with both breasts
womb intact, perhaps not
legs rounder, more blue
fannies flattened

you won’t recognize me now
you didn’t even notice me back then
so the question is
would I recognize you?

you’re not my “great love”
now perhaps your pleasant smile
over dinner would be like salt
instead of that sophomore dance
I dreamed of beneath revolving lights
then our senior careers, each of us
drifting to our separate loneliness
away from holiday gatherings
Prozac wrapped in Dollar Store paper
meeting here like strangers on parole
Posted by DWx at 12:48 PM 6 comments: