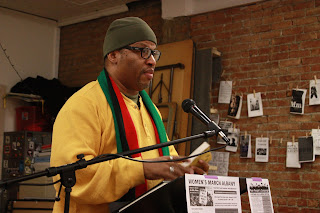 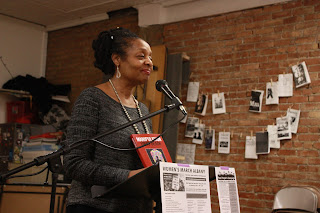 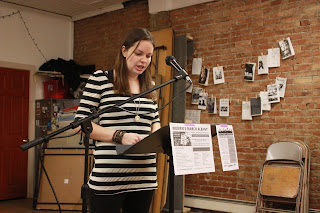 
The first poetry event of the New Year, for me, & back at the Arts Center in Troy with my co-host, Nancy Klepsch. A good way to start the year with new voices, including a couple readers new to Troy itself. 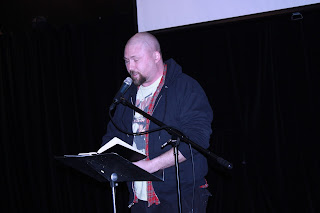 First up was one of those new to Troy, “Uncle Dirty” Elliot who gave a loud, rapid-fire performance of a rant in short line rhymes “Grey, or American Warning.” Howard Kogan read more quietly “Waldo’s Cook,” based on his reading of the new biography of Henry David Thoreau. Tim Verhaegen talked about noodling around on a piano & read a piece in the mood of what he heard, “Visiting the Art Gallery When You Are a 7-year Old.” Harvey Havel read his short story “The Scarf” from a prompt to write about staying quiet when you feel like shouting. Mike Conner read OPP (i.e., other people’s poetry), poems by Kim Roberts & by Tony Hoagland. 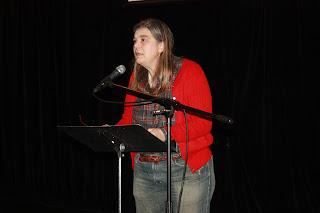 My co-host Nancy Klepsch had with her copies of her just published book God Must Be a Boogie Man (Recto y Verso Editions) & read from it “We All Pray for Different Reasons.” Peggy LeGee read from her notebook, funny, political entries she called “Let’s Explore.” Bob Sharkey’s “The Tow Path” was bit of a fictional spy story. I read 2 new poems, “I Am P” & the summary of my recent trip to Italy “Walking Rome.” Dianne Sefcik reminded us it has been 5 years with her poem “Newtown” then read some still-timely quotes from James Baldwin. 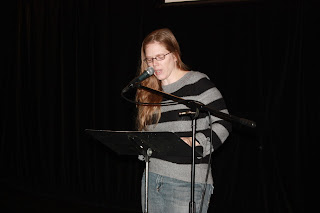 Another new voice here today was Caroline Bardwell who began with a prayer-like poem for healing “The 21st Century Psalm,” then a tour-de-force through the seasons “An Alliterative Annual in 4 Parts.” Don Yorty said he was also new to Troy, but forgot to bring his poems, so recited from memory “Uncle,” then sang a cappella a country blues. Kathy Smith read a piece about sex harassment, looking back to a ride on the subway in 1965, “What We Learned.” Karen Fabiane said she had no new poems so read 1 each from her books, the poems “Young Dangerous Beautiful” & “Orphan.”

It was another grand day of reading writing at the Arts Center where we do this on the 2nd Sunday at 2PM of most months of the year. The Arts Center of the Capital Region is at 265 River St., Troy, NY & this event is free & open to anyone.
Posted by DWx at 1:10 PM No comments: