This open mic, now on Zoom, is the granddaughter of the open mic formerly at Schenectady venues, Arthur’s Market & C.R.E.A.T.E. Space. The host is poet Jackie Craven. Tonight there were only a handful of poets reading, but with poetry, as with sex, you don’t have to have a lot for it to be good, even memorable.

I read 1st with my own “personal” experience of the bombings of Hiroshima & Nagasaki, Japan, an in-utero poem “August 1945,” then a brand new piece only days old referencing the Space Pen (remember them?) “Technology.”

David Graham has been a regular here (wherever that is on Zoom) tonight read a “new-ish” poem inspired by Allen Ginsberg’s poem “A Supermarket in California” David’s poem titled “Lament for K-Mart,” then what he called “a really old poem” a translation of a poem by Su Tung Po (also known as Su Shih, 1037 - 1101) “On the Birth of his Son.”

Susan Jewell said she has been “preoccupied with laundry,” read her poem “Now that the Children Have Grown” about her father putting up a clothes line, written in response to an image in Rattle magazine in its ongoing ekphrastic contest.

Our host, Jackie Craven, said she has been doing surreal writing, where times of the day are personas or characters in the poem as in the one she read, “3PM” with the intriguing line “we are replicas too” — anything/anyone can be a persona.

It’s too bad this went by so quickly, since anyone, anywhere can attend via Zoom. It’s on the 2nd Wednesday of the month, 7:30PM Eastern time. Find the link on the Writers Mic Facebook page & join us to share your poems.

This open mic has done much better since the pandemic forced it to Zoom. The host is poet Charlie Rossiter, who likes go around twice, one piece/performance each round.

Bridget Elder had been at the in-person version of this event, but this was her 1st time joining us on Zoom, & she jumped right in to read with “Give us Your Trees.” She stayed on theme (maybe it’s a Vermont thing) in the 2nd round with a descriptive piece about being in the woods.

Tom Nicotera’s 1st round piece was titled “Picking Up Trash,” scattered by a bear in the woods behind his house; in the 2nd round he read about a bar out in the sticks of Pennsylvania, “At Michael B’s.”

Tim Verhaegen only did the 1st round, a tender dream poem about his mother that he’s read before simply titled “I Love Her.” 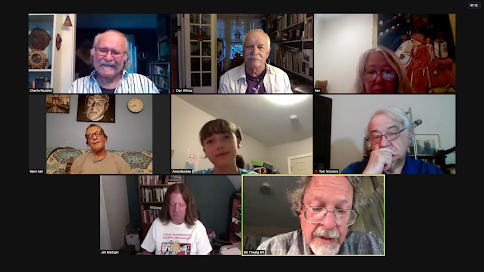 By far the youngest poet to read in this series was Helena Bushee who in both rounds read short, funny poems in rhyme; I hope all us old farts didn’t scare her off from coming back again.

Our host Charlie Rossiter read a new poem that sounded like a surrealist dream poem, but he said it was for real, “Going Places that Don’t Exist.” In the 2nd round his poem “We Bought It All” was about the post-WWII aspiration to achieve the American dream.

In his 1st round Kenn Ash read from a book he was writing, this excerpt was about a survivor on a lifeboat in a storm. In round 2 he read a love song “Fairy Tale Love” filled with references to nursery rhymes & fairy tales.

Jim Madigan dialed in from Oak Park, IL (where Charlie had run an open mic) with a new poem in the 1st round, riffing on Whitman’s “I contain multitudes,” about the result of a DNA test that showed he’s “a mutt” (as he said). In the 2nd round he referenced Homer’s Odyssey, with “Sirens” about wanting to be tied to the mast.

Bill Thwing’s 1st round poem was from his book Search With Your Eyes, a meditation prompted by a panhandler “The Land of the Brave & the Free.” His 2nd round poem, “Paleo-Man’s Dilemma,” finished up the night, & he said it was based on a dream that led him to activism.

So no matter the weather in Bennington, or future lock-downs, or traffic, you can stay safe where you are & join the 2nd Tuesday All-Genre Open Mic Out of Bennington on Zoom. If you’re not on Charlie’s list for the link, email him at charliemrossiter@gmail.com & ask for the link. Hope to see you there. 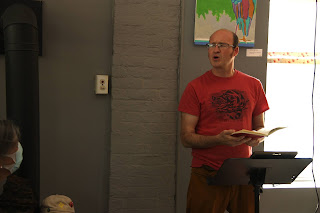 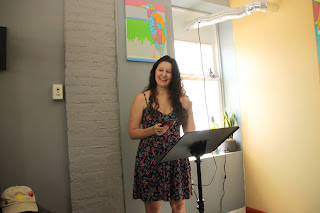 The Poetry Barn of West Hurley & the Arts Society of Kingston have collaborated in creating an exhibit, with readings, of poetry & visual art which is on display at the ASK Galleries, 97 Broadway, Kingston, NY until August 29. A virtual opening was held August 7 & began with a brief overview by Brent Felkner, ASK's Executive Director, of the August Spotlight Exhibition Dennis Connors: A Retrospective, an artist & active member of ASK who passed away in 2019. This was followed by a reading of 14 poets, with online viewing of the visual art their poems inspired from the Poetic License show. Another reading, this one live, in-person, by different poets & artists will be held on August 28 at The Poetry Barn with digital displays of the visual art, I will be one of the readers at that event 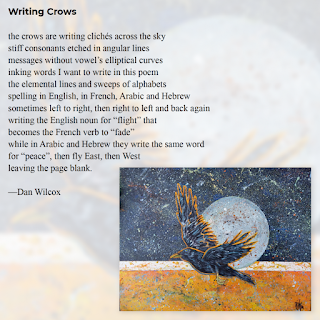 The poems were selected by co-curators Lissa Kiernan & Tina Barry; artist/members of ASK picked out poems to inspire them to create a piece, or, in some cases, pieces of visual art in a variety of media. I was honored to have one of my poems, “Writing Crows,” selected for the exhibit & was thrilled to see the visual response by SL Rika, "The Crow Flies." The art work & the poems are on display now at the ASK galleries until August 29, & I am certainly planning on a trip to see it in person. But in the meantime I & you can view Poetic License, & hear recordings of the poets, including me, reading their poems & view the art at the ASK website

The poems are short, like vignettes, or, indeed, brief pictures, & the art inspired by these poems are in a variety of styles, mostly very colorful, many representational, but not always an “illustration” but certainly ekphrastic — one art form inspired by a work, or works, in another art form. & if you are moved by any of the pieces you can purchase the art at the ASK website.