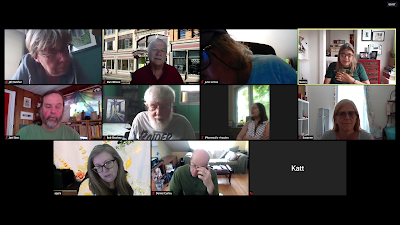 
Bennington in my home, on Zoom since we can’t get into the Tap House anyway, with our host for spoken word, music, whatever you want to do with words, Charlie Rossiter. We did 2 rounds. 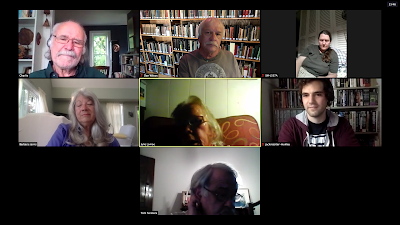 I was first up with an old poem for the Black Lives Matter events all around us, “Hands Up Don’t Shoot” for Tamir Rice, then in the 2nd round, a new piece in 2 columns “My Life with Birds.” Julie Lomoe was at this open mic for the first time, mainly because she didn’t have to drive to Bennington & read a couple pieces about her mother, in the first round “My Mother’s Head” about her passing out at a club with the Modern Jazz Quartet, & in a similar vein about going to jazz clubs in Milwaukee with her mother stalking black musicians “Jazz Crazy.”

Laura’s first poem was a splendid description of moss “Shady in the Park,” then later she read a memoir of learning with a friend to ride a unicycle “The Helper.” Charlie, with the accompaniment of his son Jack Rossiter-Munley on guitar, performed his poem with the title of a famous blues tune “Sweet Home Chicago,” then in the second round a real-life tale of speeding in New Mexico “Frontier.”

Tom Nicotera, Zooming in from Connecticut, also had real-life tales, “Blues for America” from 2009 at a late-night Motel 6 accompanying himself on harmonica, then in the 2nd round a real-life bird poem “Turkey Love.” Jack Rossiter-Munley did a couple pieces on guitar, the first a mashup of Bob Dylan’s “North Country Blues” & Bruce Springstein’s “Born in the USA” both harkening back to Woody Guthrie, then, as the night's final performer a blues “Make it Rain.”

Can’t say I missed the hour drive to Bennington, except that then I would’ve had time to spend with Charlie & Jack, but it was a pleasant gathering of poets, albeit electronically — no hugs allowed, but at least I didn't have to wear pants.
Posted by DWx at 6:55 PM No comments:


When I started this Blog in early 2007 my intent, partially, was to use it to document poetry readings & other literary events that I attend. By & large my entries are the only evidence available online of who read & what they read. It was a logical step from my handwritten notebooks I’d been keeping about the readings & open mics since 1987, notebooks that sit un-viewed in my private archive, to typing them up for my Blogspot site. As the banner says, “It's not the truth but it’s pretty darn close.” 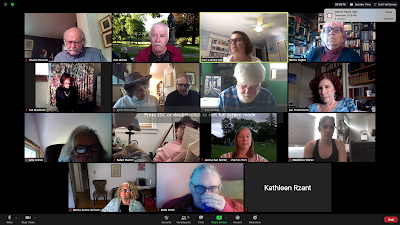 Once we entered The Age of Covid-19 some of the poetry open mics started to try out the variety of online options — Zoom, Google Meet, YouTube, etc. I’ve gotten comfortable with Zoom, even hosted my first event on that platform, the annual Walt Whitman Birthday Celebration reading of “Song of Myself” on May 31. It wasn’t the same as being in Washington Park at the Robert Burns statue, but we did have readers from as far away as Florida, Ohio, & Treadwell, NY. I didn’t record it so “… it is gone in the air, you can never capture it again” as Eric Dolphy once said, but then I never record the Walt Whitman reading because you can read it yourself anywhere anytime.  We had about 18 folks in attendance & volunteering to read a section or more to get us through that gran poem once again.

So I’ve actually written Blogs about the online open mics I’ve attended & found it is the same — & different — as being there in person. One problem I had to overcome was how to take my customary photos. But the machine can do it for me, all I had to do was to take a dump, I mean a screen dump. Of course, it was a throw of the dice getting everyone in their own little thumbnails looking good, not picking their nose, whatever. One thing that does make attending online readings very different from in-person events is that I don’t have to wear pants. 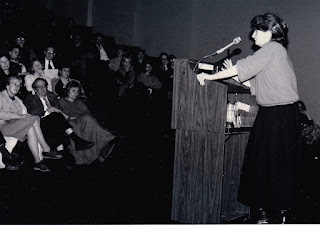 However I’ve “been” to other readings that were recorded online, someone else doing the archiving, so I could take the afternoon, or evening, off. One was a memorial to the Irish poet Eavan Boland who died earlier this year. The hour program was organized by Poetry Ireland, on May 27, 8PM their time, a comfortable 3PM here, & included poets in Ireland & the US reading Boland’s poems & talking about their connections with her. Eavan Boland had been in Albany as a guest of the NYS Writers Institute a couple times. I photographed her early on at the NYS Museum on November 20, 1987, before I knew I was building an archive of readings in Albany.

A more recent event was a live reading at Caffè Lena in Saratoga Springs, NY on the first Wednesday in June, no open mic as they normally do, but 3 engaging, entertaining poets, recorded on YouTube.  The 3 poets were Carol Graser, who is the host of the in-person open mic at Caffè Lena, Philip Memmer from Syracuse, & Barbara Ungar who is no stranger to Caffè Lena. Since you can experience this reading yourself on YouTube, I’ll just summarize each reader’s program.

It was good to hear Carol stretch out here rather than just the 1 poem she does at the open mic. Her reading included the venerable “Tribe” & a generous selection of her persona poems in the voice of inanimate objects, such as “The Ironing Board” & “The Haiku.” Her quiet poems are much more powerful for that quietness, & are filled with the leaps of language that make the listener sit up & notice.

Philip Memmer, like Barbara Ungar, had been scheduled to be featured at Caffè Lena just as everything was shut down during the pandemic. He read mostly from his recent book Pantheon (Lost Horse Press, 2019), poems written in the voice of imaginary gods, such as “The God of Driving Alone,” & “The God of Importance.”

Barbara Ungar read mostly from 2 books, her fabulous abecedarian Save Our Ships (Ashland Poetry Press, 2019) & from a new, limited edition from chapbook from Ethel Press, EDGE, named for the list of Evolutionarily Distinct & Globally Endangered species, a theme that is also treated in Save Our Ships.

Check out both recordings of the Eavan Boland Memorial & the Caffè Lena readings in the links provided above.  & look for online open mics to get your of poetry -- until we can meet again in person.