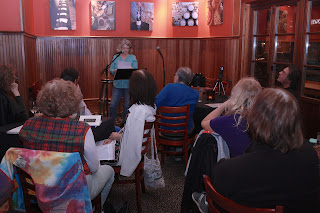 This is one of the unique poetry events in the area, a showcase reading along with an interview/Q&A, as a way to present the poet in-depth to the audience. Tonight the subject was Carol Graser, the host of the Poetry Open Mic at Caffè Lena in Saratoga Springs. Thom Francis, el presidente of Albany Poets, served as our host & interviewer.

Carol has been around in the poetry scene long before she began hosting her open mic, reading in area open mics since at least the mid-1990s. Her poems are filled with tenderness, humor & with a playful, even silly, twisting of language, sometimes all at once, & she is a master of the political manifesto/rant. She began with “Poem Read in a Dream,” then on to a wedding poem for her son “Dissolving the Distance Between You.” A couple poems from when she worked at a bookstore, the first in the “persona” of a haiku, & “In Congress Park on a Lunch Break” talking to the violets, then to an ars poetica of sorts “Ghost of Ambitions.” She included a couple poems about her mother, one a pantoum about holidays after her mother’s death, & a couple poems that sprang from workshops with Bernadette Mayer (a veritable genre unto itself), one with a political bent playing on sounds & images from an assignment to use made-up words. One of Carol’s specialties are poems in the voice of voiceless objects, such as the haiku mentioned earlier, & another about, & in the voice of, “The Appendix.” She ended with an inspiring political rant from last year “Women March on Washington All Over the World.” 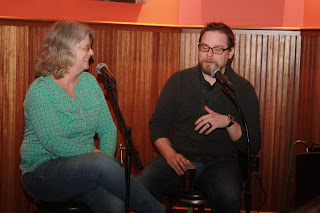 Thom Francis likes to start his interviews of the poets with the question, “When did you start writing poetry?” Carol responded that it was when she was about 10 years old, for a 5th grade assignment, & found she liked doing it. Even now, she said, she works well with an assignment, as in the poems she had written while in Bernadette Mayer’s poetry workshop.

To another question she she explained that she also works well with poetry groups, where the members read & discuss a particular poem. She talked about her early years in the open mic scene, including reading at the old QE2 open mic in Albany run by Tom Nattell. She also talked about starting her own open mic at Caffè Lena back in 2003, worrying that no one would show up — it is still going strong on the 1st Wednesday of each month & gets a good crowd of local poets for the open mic & for the featured poet.

Albany Poets Presents takes place about every-other month at the Navona Restaurant on New Scotland Ave. in Albany, NY; come early & have dinner. Check the AlbanyPoets website for details & for the date of the next one & who the guest poet will be.
Posted by DWx at 9:27 PM