Originally, poet Patricia Smith had been scheduled to read this night in the NYS Writers Institute Visiting Writers Series, but she had to cancel. The reading was paired with a screening of the documentary film Louder Than A Bomb, as part of the University at Albany’s 16th Annual English Graduate Student Organization Conference. I had interviewed Patricia Smith for the cable TV series The Poetry Motel in 1998 after she read in Poets in the Park. Years later, at a Poetry Therapy Conference in Boston, Charlie Rossiter & I hung out with Ms. Smith & the poet Quincy Troupe, who had also once performed in Albany at the QE2.

Tonight’s readers were the local poets/scholars Leonard Slade & D. Colin (both of whom also have read at Poets in the Park in Albany, Slade in 1993 & Colin in 2011). & Danielle is a student of Prof. Slade in the graduate program. 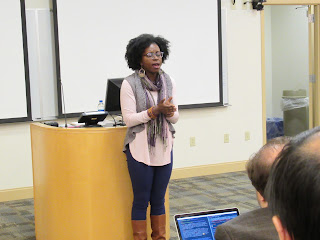 Laurin DeChae, Editor-in-Chief of Barzakh Magazine,  introduced D. Colin who began with poems from her 2015 collection Dreaming in Kreyol, a book that never seems to want to sit on my shelf too long. She began with the lyrical — literally, since she sings the beginning — title poem, then “Dear Anancia” about her grandmother & her own birthday, “Artibonite Woman” from her first visit to Haiti at age 13, & a poem from the 2010 earthquake “Up Ahead We’ll See.” She went on to read/perform 3 poems from a forthcoming collection Chalk Lives, “On the Pulse of Ancestors,” “Mourning Sons” (on police killings), & “For Every Black Woman Who Has Been Called Angry.” 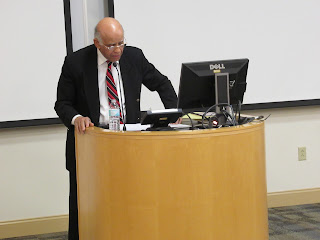 Professor Leonard Slade delivered what was the Keynote Address for the conference, & was introduced by NYS Writers Institute Director Paul Grondahl. He gave a brief talk then on to a reading of a number of his poems. He discussed the passing of Time with a discussion of what is poetry?” including some (negative) reviews of famous writers, off-setting quotes from John Keats with quotes from Count Cullen, E.A. Poe with Gwendolyn Brooks & Langston Hughes. His poems were about the history of black folk in America, with tributes to historical figures like Abraham Lincoln, Martin Luther King, Jr. (whom Dr. Slade had heard preach in 1961), Maya Angelou, Barack Obama, & some of his mentors from when he was a young student & scholar. There were also tributes to his mother (“The Black Madonna”), & some tender pieces for his wife. There was even a poem for cats & cat lovers. He ended with one of his favorites “The Country Preacher’s Prayer.”

We are blessed to have so many interesting, thoughtful & powerful poets in this area & these are 2 examples of the best.

For more information about the programing (most of it free) by the NYS Writers Institute, visit their website, www.nyswritersinstitute.org.