Unfortunately the featured poet scheduled for tonight had cancelled only a few days before, but that did not stop other poets from showing up for the open mic to read their own work, so tonight the limit was raised to 2 poems. But before the living poets read I invoked the Muse, the recently gone poet Gerrit Lansing who had been born in Albany 90 years ago. I had recently attended his memorial ceremony & his birthday celebration reading in Gloucester & heard his poem “Song (Autumn Festival)” performed by Nicole Peyrafitte & again by punk rocker Willie Alexander, so tonight I read the text then played Willie’s version from his CD I’ll Be Goode (Fish Eye Records). I had hoped that our scheduled reader, Nancy Dunlop, would be here to hear this, as she had told me a couple weeks ago at the Troy Poetry Mission that Gerrit Lansing was a poet whose work she admired, but alas that was not to be the case.

On to the living — & present — poets. Douglas Holiday/Davis IV read OPP (“Other People’s Poetry”), i.e., James Weldon Johnson’s “Go Down Death” & Joe Carson’s “I Am Asking You to Come Back Home.” 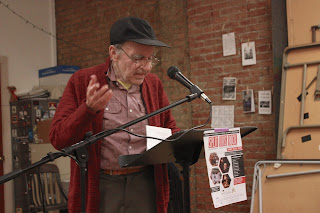 Joe Krausman announced with pride that he is the winner of this year’s Raynes Poetry Contest sponsored by Jewish Currents magazine, a prize named in honor of the parents of the late Helen Staley nee Raynes; Joe has entered the contest a number of times & was a semi-finalist & a finalist in the past. Carrie Czwakiel has been on the scene for a while but this was her first (virgin) reading here at the SJC, & talked about & read about her life, freeing herself from a 20 year abusive relationship. 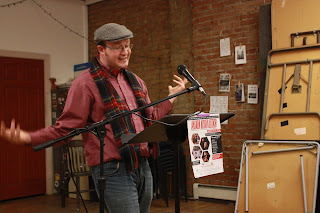 Avery did “On the Other Side of Overwhelmed” & “No More Monkeys Jumping on the Bed” a poem about meditating, both performed enthusiastically, as is his wont. Brianna read a thoughtful poem on race “Lies I Tell My 3-year Old Son.” Don Levy read a brand-new poem just written today “To the Students of Parkland” in appreciation for their activism, then had us laughing again, as he did last night with “My Hardon for Adam Rippon.” I figured I’d best be the one to follow Don Levy & read a new poem inspired by a Tarot reading “9 of Cups,” then an old poem for St. Patrick’s Day “Sheila-na-Gig.” 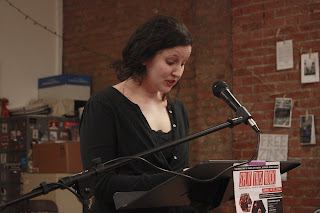 Maria made a rare appearance here with a poem inspired by her son watching a snow storm, & read Pablo Neruda’s “To the Foot from Its Child.” Desmond Gonzalez was a first timer here, the night’s 2nd virgin, & recited a long rant he had carefully memorized about the Parkland shooting, & said his sister was student activist Emma Gonzalez ! -- a bit of synchronicity that Don read his poem for the students earlier, then went on to leave it on a lighter note, a funny take on the “Roses are red…” rhyme.

We are at the Social Justice Center, 33 Central Ave., Albany, NY each third Thursday at 7:30PM for an open mic with (usually) a featured reader — your donation supports poetry programming in Albany & the work of the SJC.
Posted by DWx at 8:16 PM