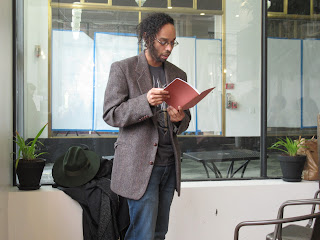 St. Rocco’s is a poetry series that has been going periodically for about a year & a half at various locations primarily in Albany’s South End. This Saturday afternoon event was at Stacks Espresso Bar, 488 Broadway. 3 poets read, Edmund Berrigan, John Mason, & Natalie Eilbert. The reading was delayed briefly because of travel problems by Ms. Eilbert, & there was an abortive attempt to set up an amp & mic, but the place was small enough for the poets to make themselves heard without the mic. This was a good thing because there was no mic stand, which makes it difficult for poets reading from books or manuscripts juggling a mic too.

The co-hosts were community writers Alifair Skebe & JP Garcia. While we were waiting to start Alifair introduced JP for a “pre-reading” & he read from his new chapbook So This is Story, a section titled “Zero” a fragmentary piece like notes to a story. 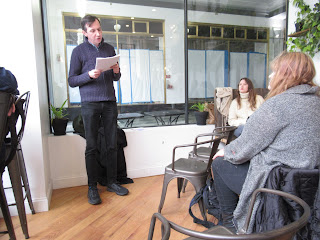 JP introduced the first reader, “Edmund,”as if we were all suddenly good buds. Most of what Edmund Berrigan read was from a new manuscript currently titled “Sharing Error, Permission to Disembark,” the poems often like diary entries, discursive, often introspective observations of the everyday. There seemed to be a lot of waking up & day-dreaming poems, such as “3AM,” “Wake Up & Wonder.” There were a couple poems related to visual arts, “Bold Leaps from Canvas to Fabric” responding to art by Rosemary Mayer, & “Transformative Days” after the work of Francis Picabia. Coming from a family of poets he mined some of his family’s poems; “Unnatural Day” was based on the work of his father Ted Berrigan, & from his brother, “Lines by Anselm.” 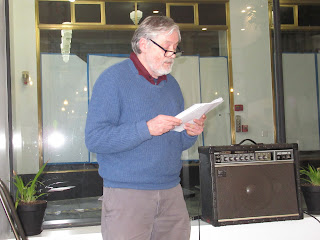 John Mason’s poem shared the quotidian with Berrigan’s. He began with a descriptive alphabet poem written near the Hudson River, nature, mountains & sky. There were also birds (“Dominion”), a couple of cat poems, a couple about peeing, & a narrative imitating the work of Charles Reznikoff (1894 - 1976). “The Time of Lots” in the parking lot of a church & “Night Alley Walk” both dealt with time & clocks. There was a kitchen poem & one on soup cans, & “The Game of Life” for his brother who is also a poet. One poem played on the phrase “well thought” while one titled “Tide” played with made-up words. And in “Cana” & “Cana 2006” he contrasted the New Testament story of Jesus at a wedding with the modern attack on the Palestinian town by the Israeli military. 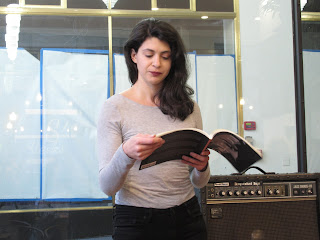 Natalie Eilbert began with reading from her book Indictus (Noemi Press, 2018), winner of the 2016 Noemi Press Contest. It deals with childhood memories, a fire & sexual assault, which she said was “difficult to write.” From that she turned to pieces from a new manuscript on nature/anti-nature, on the sick world, writing long poems now. In “Bildungsroman” she again alluded to the house fire. One section was titled “Dear Sister,” what she described as a series of bereavement poems. Another section, all titled “From the Lake,” included a childhood painting & medical issues, the Mall, blood & language, a move to Wisconsin & a confrontation with ecological disasters such as the denuding of a forest. But she too shared with the previous readers an attention to the details of everyday life as a way to comment on human consciousness.

The St. Rocco Poetry Series appears to happen irregularly so it seems the best way to find out about it is from their FaceBook page where you can also sign up for their mailing list & show your interest in reading in the series (or not).