I decided to make the trip down to Kingston to this reading at the Unitarian Universalist Society of the Catskills to hear a couple of my favorite poets, Bertha Rogers & Richard Levine, both of whom I’d featured at readings in Albany. The evening was hosted by Annie LaBarge who organizes the series. There was also an open mic around the featured readers.

Fred began the first open mic cluster with a lyrical piece to his family nose “The Nose Knows.” Matt Spireng read a take-off on the often heard phrase “Your Call Is Very Important to Us.” I followed with my take on last year’s eclipse “Spathe is the Plathe.” 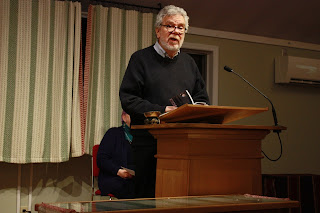 Richard Levine was the first featured poet, reading largely from a new book titled Contiguous States coming out in the Fall. “Just Sleeping” looked back to his experience in Viet Nam & to dreams, then to a poem about seeing the eclipse in Hopkinsville, KY “I Am a Witness,” & an eco-poem “At Our Door” how the storms are beyond our control. Richard then invited Bertha Rogers up to do a bit of back-&-forth, her first poem set in Scotland “Walled Garden,” to which Richard responded with “Post Marks” about a fence & wasps. Then to poems on paintings, Bertha read a sestina on Paul Klee’s “Birds Wandering Off” & Richard read one on van Gogh’s “In a Blue Wood.” Continuing with his solo reading Richard read the title poem “Contiguous States” from his forthcoming book a love poem, then to a couple of his war poems, “Graceland” (which is always new whenever I hear him read it), & “5 Words” (“thank you for your service”) & how to respond to them. He ended with a memorial poem, “Is” about “past-tensing” his friend.

After a short break — cookies, coffee, & browsing the book table — we returned to the open mic. Judith Kerman read poems from a new collection she is working on titled Gymp: “After a Failed Surgery,” “Chair,” & an acrostic “Trying to Sleep.” Betty McDowell read about koi dead in her pond & eaten by crows, then another about helping a friend at the ER, & one titled “Thanksgiving Misgivings.” 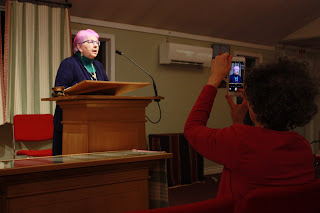 Bertha Rogers was the night’s 2nd featured poet, & began with excerpts from her crisp translation of Beowulf (Birch Book Press, 2000), a beautiful letterpress edition with Bertha’s drawings; tonight she also read a bit in the original Anglo-Saxon. Then a back & forth with Ricard, Bertha a riddle from the Exeter Book, Richard followed with “Being Touched” (rescuing a bird), Bertha another riddle, & Richard with another poem with a bird “Believe This” about starting a garden. Then Bertha continued with more riddles from her translation from the Exeter Book, also known as the Codex Exoniensis, a 10th century anthology of Angle-Saxon. The riddles, which we all tried to guess, show what masters of the metaphor these largely illiterate folks were. She ended with more excerpts from her Beowulf.