I drove up to Schenectady with my friend & Albany poet Don Levy to this monthly open mic in the Stockade section of Schenectady, both to read in the open mic & to hear the featured poet Luis (L-Majesty) Pabon. But first our host Catherine Norr sang a song in Spanish to call on the Muse for the night.

In spite of arriving close to the start time I was able to sign up first on the list & read from a poem “Tracings” from my 1995 chapbook Ireland, then a poem referencing the recently gone poet Lucie Brock-Broido “Vowels.” Alan Catlin read a poem from 2005, one about bombs & death, “Love in a Time of War.” Ginny Folger read a new piece “My Father’s War Pictures.” Susan Jewell’s ekphrastic poem “The Day Teddy Roosevelt Became President” was an entry for the Rattle contest. Caroline Bardwell has been working with forms & read a sestina “The Power of Words” & a rhyming sonnet “The Strange Phenomenon.” 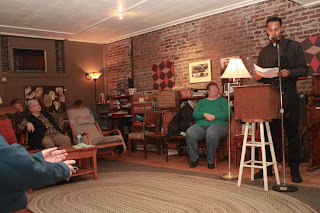 Tonight’s featured poet, Luis Pabon, whose performance name is L-Majesty, announced he had a new book titled Bone Jelly coming out soon. But what he read tonight was from 2 previous books, plus some new work. From Ricanstruction (2 Pens & Lint, 2016) he read “The Island of my Father” & “Masc. 4 Masc” on images of gay masculinity. Then from Inclinations (2017) “War Stories” a love poem, “Reminiscing,” “My Abuse, Myself” another father poem, & “An Ode to All My Lovers.” The new work included “Schisms,” “Lost Fortune” another love poem, & ended with another father poem “Stranger Danger.” Tonight a quieter reading than I’ve seen L-Majesty do in the past, poems of love & of hurt & of healing.

After a break & a chance to buy Luis’ books we can back for the rest of the open mic poets, including our host Catherine Norr who read a wonderfully descriptive “Buddha at my Table,” then a poem about death “Words Upon a Platter.” Don Levy read a poem about the murder of a young gay man “Blaise,” then the raucously hilarious (in the mode of his “gay fantasy” poems of the past) “My Hardon for Adam Rippon” the Olympic figure-skater. 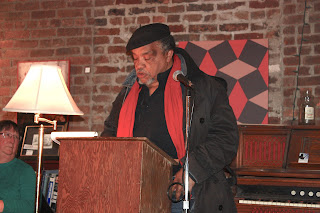 I always enjoy the community of poets at this cozy venue each 2nd Wednesday of the month in Arthur’s Market, 35 N. Ferry St., Schenectady — 7:30PM.
Posted by DWx at 3:49 PM