Our usual space in the Black Box Theater (named after a crooked local politician whose name I won't mention) was quite unlike what we are used to for this open mic: there were green plastic tables & chairs arranged throughout the room, created when the stadium seating was folded back against the wall, apparently for a dinner here last night. In the absence of my co-host, Nancy Klepsch, I made the decision to just leave it that way, creating a psychological test of how well poets deal with change. In spite of some kvetching (“it looks like a kindergarten,” “do you think this chair will hold 300 pounds?” etc.) we all survived, although perhaps some will forever after enter that room with fear & trepidation at what they might encounter. & Nancy took the day off, so I was left on my own with a room full of anxious poets & a bottle of wine. 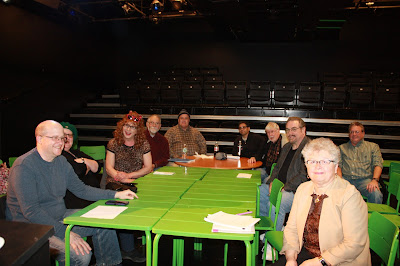 First reader was Dan Curley with a piece on travel & the return home “Being Back,” then one on grading papers “9:34PM *” (he said the asterisk was important). Tim Verhaegen had us clutching our sides with laughter as he read his essay on meetings at work, all-too-familiar to most of us. Peggy LeGee began with “Mentally Ill Chemically Distracted,” then read a couple of song lyrics from a musical drama she is writing about herself, one about a German exchange student from her youth, then “You’re Addicted to Distraction.” Harvey Havel read an untitled work-in-progress, a story of a guy from a good family with a hooker girlfriend, stopped when he ran out of pages.

Bob Sharkey read another in his series of re-written fortune cookie fortunes “Convex Features," then talked about poets’ responses to a question about people who have influenced them a conversational poem by Paul Durcan.  Howard Kogan began with a poem titled “Dahlia,” then a true story of a wake “La Rocca.” Steve Rieger came back this month from his last time here to read a piece about Lenny Bruce “Dig It.” Mike Conner read “Winter Warden” from his self-published chapbook Seasonal Musings, then another Winter poem “Moment at Home.” Kate Laity's story “I’ve Told Every Little Star” was about a grungy couple living in a squat. Karen Fabiane’s poems “Cat Blinked” & “Collars & Cuffs” can be found on her Facebook page where you can read it for yourself.

Rena Ehrlich (which sounds closer to her Russian name then Inna Ehrlikh) began by reading my poem “What I Found at the Bus Stop” then her translation of it into Russian, Что я нашёл на автобусной остановке когда снег растаял; then 2 pieces from Russian “Napoleon” by Inna Goukhman & “Birthday” which was dedicated to Rena by her friend Sara Stoljarova. Then, quite anti-climatically after my own poem in Russian, I read 2 poems from my 1995 chapbook Ireland, “Brigit (for Michael Quirke of Sligo)" & a postcard poem about the cows of Limerick. It turned out to be a good afternoon on the kindergarten chairs.

I can’t promise what the Black Box theater at the Arts Center in Troy, NY will look like on the next 2nd Sunday @ 2, but I will promise we’ll be there for an open mic of poetry + prose & that it will be Free! Bring something to read.