Always a feisty event, tonight no exception, with our host Mary Panza. Tonight’s featured poet was Stella Padnos-Shea, but first, some of the open mic.

Sylvia Barnard likes to be first so she can relax after & listen to the other poets, tonight she began with a work-in-progress an urban tale about walking thru the snow & and an encounter with a cabbie, then a poem about thinking of her daughter & son-in-law & Thanksgiving “Family.” I read my new “Birthday Poem” for this year & a slightly older piece “The Poet’s Coat.” 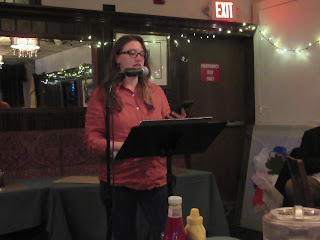 Alifair Skebe, who had been coaxed into reading by Mary Panza, read 2 poems from a mss., Poems in the Child’s Voice, “What I would Take With Me” (about planning to run away) & one set in Louisiana at age 7 “Searching Out the Crayfish.” Carrie Czwakiel read a poem about her grandma’s reincarnation “Bee Balm Garden,” then a poem from a few years, a provocative description about what she likes/doesn’t like about online dating. Thérèse Broderick read a poem from her forthcoming book Breath Debt, about her daughter in 2nd grade on 9/11/01 “To Carry Forward, for Elizabeth.” 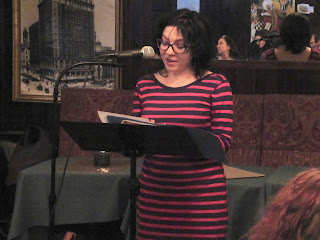 Stella Padnos-Shea is a poet from Brooklyn, with an Albany connection. Most of what she read was from her book In My Absence (Winter Goose Publishing, 2016), but she started off with a poem about being in Albany with her daughter & her boyfriend, then one about an old photo of a Greek woman at Ellis Island, imagining it could be her grandmother. Many of the poems she read from her book were addressed to, or about, her daughter, “You Must Know,” “Looking the Part,” “In My Absence” & “Good Night Stars” (taking off from the classic Good Night Moon). Others included “Tumbler,” & “Groundswell.” I hope she visits Albany often & we get to hear her again.

Back to the open mic, Brooke Kolcow took us to the ocean in her poem “Maine Things” then read a list of the small wonders in “Poem for Smalbany.” 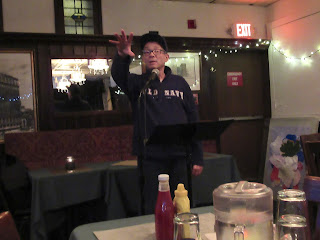 Returning to Albany after a long absence Luis Chaluisan did an impromptu piece about things going bad in Puerto Rico after Hurricane Maria. D. Alexander Holiday read a political piece, “Gracias Fidel” from his new book Kith & Kin: a Klannish, Klownish, Tragic Komedy, then a poem about an adventure “An Observation of the Irish Festival.” Joe Krausman read a piece about a couple’s conversation in bed, on lying & “fake news,” then pondered “What’s In a Name.” Algorhythm made a rare appearance at a poetry reading, doing a hyped-up performance on the “last of the real street poets,” then a section from his longer piece “The Philosopher’s Stone.”

Always a fun night on the last Monday of the month for Poets Speak Loud! at McGeary’s on Sheridan Square in Albany, NY, 7:30PM — a featured poet & an open mic.
Posted by DWx at 8:48 PM