Once again at the Social Justice Center. I invoked the muse of the recently star-dusted Lenore Kandel, then our poets lined up. Since the Tour Bus got lost in the back streets of Ravena, we had the rare 2-poem night. You had to be there to benefit.

Alan Catlin did an animal poem "The Dogs on the Beach" (but not your fuzzy, warm animal poem); then read a 5-part poem at Cape Canaveral, Florida, 1986. Sylvia Barnard was going to cheat by reading "a poem in 2 parts" but now could be honest about reading 2 poems, also harassed me with animal poems, "Frogs" & "Ducklings" in Cambridge; there are animal poems & then there are animal poems.

Therese Broderick said "How It is Said", twice, on a death & life . She was followed up by her husband, Frank Robinson, with nods to Therese, "Teenager Looking at Comic Strips" (he rewrites one of her poems), & a literal-minded description of what he was seeing.

Anthony Bernini was "shocked" to be able to do 2 poems tonight, but only read 1, "Border Streams" (a stream in Troy). But I read 2 poems, "Kandinsky's Red Spot" & "This dream is not about you," both recent works. 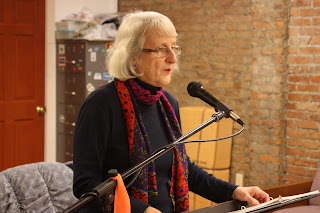 The featured poet, Barbara Adams, had a bunch of her friends to cheer her on (if your friends & relatives don't come to your readings who will?). She read "backwards," from a new manuscript first. She started with "Butterfly Mood" (that includes an appearance of a deer, another "animal" poem); "In the Oyster Bar" with an old friend, "Squatter's In Eden" (the title poem of the manuscript) is Eve's musings, "Dry Rain," "Thieves" in the British Museum, a poem on Sappho's poems & the "death of poetry", "Closure" (a love poem), & "Sonnet to a Lazy Lover with Apologies to Poor Will." Then on to poems from her previous books, including "Helen's Ghost" on her mother, "Self-Portrait of my Dad," "Prescription," & "Baby Skin, Notes for a Grandchild".

Then after all the announcements as we were just ending, Cyrus who had wandered in from the street to use the bathroom recited a love poem -- life in the big city. & poetry at the Social Justice Center, every third Thursday, 7:30 PM.
Posted by DWx at 12:16 PM