Our host, Mary Panza brought the crowd, including inadvertent diners, to order. The first poet, Marc Nadeau, had been hanging around for a long time waiting for the open mic to start & led off with an apocalyptic-America rant. I was bumped to number 2 & read "Planting Tulips" for the season & "Prayer" for all the young housewives in the audience. Carolee Sherwood had a different take on Autumn leaves & writing in "Revision" then read a poem she said was on the color red, but I got lost & now need to read the poem.

RM Engelhardt read a couple poems from his book The Last Cigarette, one, of course, about Truth & the other with Goth girls in it for Halloween. Don Levy's Halloween remembrance, "The One Time I'm Not Interested in a Trick," was about when he was egged on Halloween when he was 12 years old. Todd Fabozzi's poems "Suburbanites" & "HMO" are from his book Umbrageous Embers. 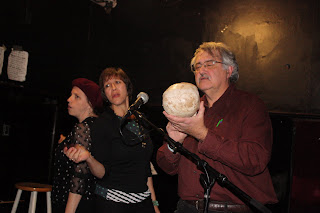 The featured poet was the performance group Not Just Any Tom, Vic and Terri, from Connecticut. These folks are my friends with whom I've performed & partied & hosted at my house. They are Tom Nicotera, Victoria Munoz & Terri Klein. I like their work & they didn't disappoint the Albany crowd, performing a selection from their CD, including Tom's "Why I keep My Mullein," "When I think of You," Victoria's "Poets Erotica," the helpful "Things Not to Say on a 1st Date," "Hedonism 101," & the wonderful ensemble version of Hamlet's "Alas, Poor Yorick" soliloquy. Glad they made the trip, too bad they couldn't stay over. They have CDs available; ask me.

I noticed that Sean Gallagher had shown up with former slam poet Dan Stalter, but if I hadn't seen them together I would've guessed it, because when Sean performed his slam-style poem in tribute to Orson Wells' "War of the Worlds" he did it with the same accent & intonation that Dan Stalter does with his slam poems. Tess Lecuyer read 2 very scary poems, "Hamiliton St. Sonnet" about going down the Hamilton St. hill on a skateboard (or being in love), & the Halloween "Your Curses."

The afore-mentioned Dan Stalter performed a poem in his signature accent/intonation about a car & a relationship. 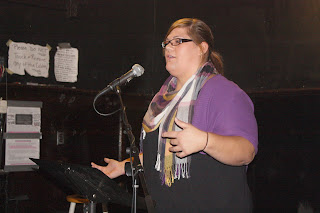 Then Shara Bender did a sex & revolution slam poem in that same accent/intonation (guess what, she came with Dan & Sean); she also did a chilling piece on a friend OD-ing on pills. I'm suspecting that Sean & Shara have been coached by Dan on their performances, picking up his style & performance accent, or that all 3 of them have had the same slam coach, cloning the next generation of poets. I'd rather hear their own voices come through with their good poems & spend more time on "the writin'" rather than "the recitin'."

Brian Sullivan was back with another short short story, "The Cad in the Hat." & speaking of being back, Brigid Schmidt showed up (in a "Winking Witch" tee shirt) after a too-long hiatus from the scene to read a poem involving her family, "Poetry's Mother."

Another poetry filled last Monday at the Lark Tavern (on Madison Ave.) in Albany NY. Bring a poem -- & an appetite: the food is great! & so is the waitress. 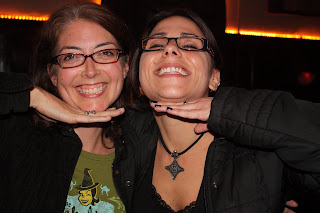