ALL HALLOW’S EVE, A RECKONING: The Tribute To Edgar Allan Poe, October 30

Actually, if you notice the date, you will know that this event was held on the eve of All Hallow's Eve (where the word "Halloween" comes from). It was a benefit for the Albany Damien Center & held at the Fuze Box on Central Ave. in Albany, NY., hosted by Albany poetry impresario RM Engelhardt. 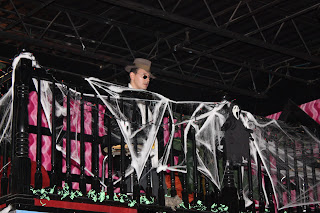 The early performers of the night did versions of Poe's work, beginning with AC "Breaking My Art" Everson performing Poe's "The Raven" then smashing a raven piñata. Then the poem itself was deconstructed by Terry Bat-Sonja (as Ophelia), who by the end of the night was back to sit on stage to read some shorter works by Poe, "Eulalie," "The Lake," & the sonnet, "An Enigma." 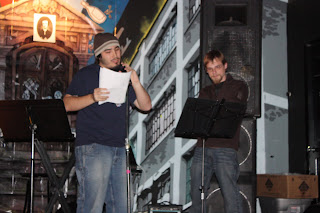 Then came a series of "bands" or troops or duos, beginning with Murrow, first Thom Francis & Tony "The Intern" performing Poe's "The Bells." Then Murrow in its usual form with Keith Spencer on guitar & Thom Francis doing his own poems. They were followed by John Weiler reading Poe's "The Conqueror Worm" then John on slide guitar with Mary Panza as The Johnny Bravehearts doing "Annabelle Lee."

The Black Heart Contingency was "Mr. Grey" (Will Nivins) & "Mr. Dark" (our host, RM Engelhardt). I couldn't quite make out what they were doing since the guitar was so loud as to mostly drown out Rob's fake English Southern accent. But I'm quite sure there isn't any Poe poem that goes "la la la la la la la..." etc. At some point I heard him say something about the Psychedelic Furs (which explains the English accent); I don't think it was "Pretty in Pink." 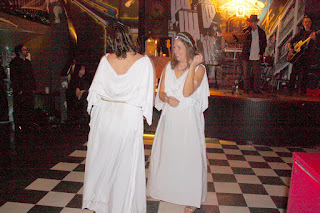 It was during their set that Joanna Brown Flynn & her lovely friend, both in white goddess robes, danced & staggered about the floor, a welcome distraction.  Somehow I missed Terry McClain as he was announced from the stage; maybe I was taking a pee.

After that the evening seemed to break down, with J. Dalaba & Dan Stalter doing their own poems & Rob asking, "anyone want to read a Poe poem?" I hung outside with the smokers for a while, got another drink, talked to other non-reading poets in the audience & watched the goddesses make out. 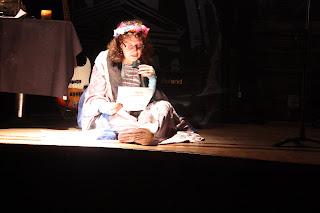 When I left as the fake absinthe party was starting I ran into another group of poets hanging outside on the street (an old QE2 tradition), former Albany poets Leo! & Emily Gonzalez with local artist & poet Marcus Anderson. It was fun to catch up on the news & see these folks again (& not have to deal with goofy costumes). But with "Goth Night" on a regular basis in Albany it seems like Halloween happens a couple times a month -- at least they don't come to my house looking for candy.
Posted by DWx at 3:24 PM

Wow Dan, gotta be honest. You are way off base with all of the acts, the names etc. on this one. So here's a few corrections. Terry McClain was a solo act (as he was announced from the stage) and is not a part of The Black Heart Contingency. The Contingency is made up of musician Will Nivins (Mr. Gray) & myself. Also? The music which was done was also a part of the Halloween Spirit. Peter Murphy, Interpol as well as bands such as The Church & Bauhaus were covered as well as Psychedelic Furs. And the Absinthe? Real. It (Lucid) has wormwood in in it & absinthe was legalized in the US about a year & a half ago.

Not to mention? The show ended and then I went out for a smoke.

It was a great night & a great celebration of Poe's work & his
200th birthday not to mention we raised a good amount of money for the Albany Damien Center. So, with the correct information now given, thanks to all the cool people who came out to celebrate Halloween with us, especially...The Goth ones! ;)

Thanx for the corrections ; ) !
By the way? The Absinthe was real. Another fact missed.

Once again, we celebrated Poe's life and raised money for the Center. Thanx to all who participated.