This series seems to be resuscitated at the UAG Gallery, though I didn't catch a mention of anything upcoming after this. Anyways, Anna Eyre, who is a grad student in English at the University at Albany, did the introductions to what was a study in contrast. 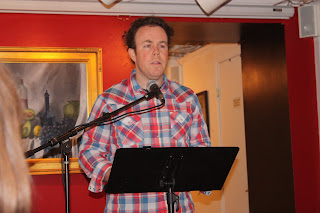 James Belflower was the first reader. He is the author of Commuter (Instance Press) & he had read back in October with Anna Eyre in the Yes, Reading! series. He read a new piece, "Bird Leaves the Cornice," which seemed to combine a discussion about birds with text from an architectural manual, including a discussion of contour lines. Then he read from the Prologue & an excerpt from the first section of Commuter, having to do with bomb making, like something out of the Anarchist Cookbook. Now I guess this entry will make it on the NSA watch list, if I'm not already. 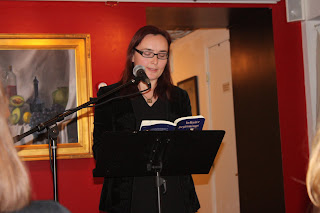 The poems of Lucyna Prostko were more the human/experiential side of poetry, rather than the manipulation of text or ironic philosophizing side. She read selections from each of the 3 sections of her book, Infinite Beginnings, the 2007 Poetry Book Award from Bright Hill Press, but just published this year. The first section was about the people & the village she came from in Poland. The second section was about her grandmother's, Paulina, experiences in World War II; the third section her more recent experiences, including her husband's experience in the Serbo-Croatian war ("Landscape After the War"). Faced with the choice of buying one book, I bought hers.

I was pleased to see that this series was back, but it was nearly indistinguishable from the Yes, Reading! series which of late has been held at the Social Justice Center: same 2-poet format (no open mic), same audience, even one of the same reader (but different hosts).
But this was only Part 1 of the evening ...