Guanyin and other poems, by Gene Damm 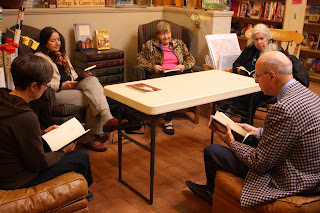 Gene Damm has been around the poetry scene here in Albany as long as I remember, in fact I remember him as a fellow student at SUNY-Albany (as it was called back then) in the late 1960s. He has now published a book of his poems, Guanyin and other poems (The Troy Book Makers, 2009). Recently he did a reading/book-signing at the Book House in Stuyvesant Plaza to promote it.

He has gathered together about 80 poems, only 1 more than a page, in various voices & personas, including his own. As expected from a book with the title the name of a Chinese province some of the poems are versions or imitations of Chinese poetry. I was pleasantly surprised to find a variation on a famous poem by Wang Wei ("A Mountain" in Gene's version). There is even a poem in Chinese which strangely doesn't seem to be translated. But he also plays with French settings & I even noted wistful nostalgia as in the poems of C.P. Cavafy in "Nocturne" & "The Nude Maja."

Guanyin and other poems is available at The Book House & at Market Block Books in Troy, or ask Gene about it the next time you see him out & about at a poetry reading. Support Your Local Poet.
Posted by DWx at 4:59 PM