This was the third in a series of readings at the Arts Center of the Capital Region in Troy (NY) going back to May. Tonight's theme was "Family" & was hosted by Marion Roach Smith.

Dona Brent read a series of vignettes that sounded like stand-up comedy bits, complete with a Bronx accent. Each little piece, titled with the apartment number, was about the tenants of that apartment in a building on White Plains Rd. in the Bronx where the author grew up. 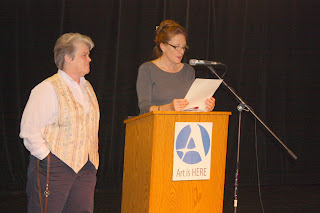 Desiree M. Roberts' piece, about the onset of her blindness & it's impact on her siblings, was read by Marion Roach Smith. In it, the family goes for genetic testing to see if any of the other members carries the gene that caused the author's blindness, & their reaction when none do.

Tina Lincer was another author whose piece sounded like a comedy routine. "Cheap Thrills" was about her mother's penchant for bargains & coupon clipping, & how those skills have returned to the author in the midst of the recession.

Rosemary Christle-Renaud's account of caring for her mother with dementia was filled with the irony of her taking on the day-to-day duties while her mother (& the rest of the family) battled over declaring the mother "incompetent".

Elisabeth Henry's piece was the only one told in the third person, skillfully blending the account of a still-birth of a child with a story about raising chickens.

Everyone likes stories about other people's lives, but for my taste I like to see the hand of the artist in work presented to the public, not just for therapy. Someone once said that all writing is autobiography, which we recognize in all the great novels of the past. Somehow today we value the "authenticity" of memoir over the craft of a good story. Personally I think it's just marketing & pandering to the same impulse towards voyeurism that sells gossip magazines, & makes Oprah, & Jerry Springer & "Entertainment Tonight" so popluar. I prefer the art of On the Road to the "memories" of Angela's Ashes.
Posted by DWx at 1:36 PM