Our lone host was Dennis Sullivan, who did just fine, with a series of open mic readers before the featured poet, Jay Rogoff. So I was at the top of the open mic list with a chance to do 3 poems, "Red," "The Lilacs" (a city nature poem), & a moon poem with footnotes. 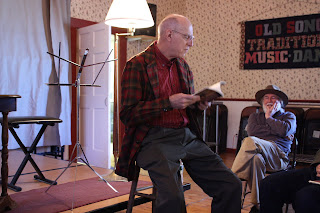 Gene Damm read from his new book, Guanyin (Troy Book Maker's), a series of short poems (when you see Gene ask to buy his book, or contact the Book House).

Tim Verhaegen had poems about his grandmother & about his mother ("Is She Crazy of Just Plain Mean?"), & then read the wonderful "What If I Said." Dennis Sullivan read the tender "Reflections on a Bodal Moon," then an homage to the nuns who taught him as a child, & the deep "Shall I Pull Up a Piece of the Ocean Floor?" Alan Casline introduced us to a poem by Elizabeth Coatesworth then took a tour of the poem (Alan's invented form), then some Kerouacian Blues poems from a recent NYC trip. 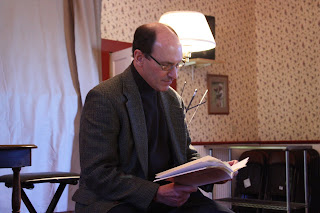 Not that I'm a groupie or a stalker, but this is about the 4th time in about a year that I've been to a reading by Jay Rogoff, which includes when he was featured at the Third Thursday Poetry Night. But like a good jazz performer, he is the kind of poet one can hear more than once & still enjoy. He read mostly from The Long Fault (Louisiana State University Press), which he described as woven with his obsessions with history, art & the human imagination, including such favorites as "The Guy who Passed Me Doing 90 MPH and Playing the Trumpet," "Jane Austen, the Inventor of Baseball" & one of my personal favorites, "Memorial Chapel". "Death's Suit" he said he had never read before. In the midst he read from a new chapbook of sonnets, & a new poem about his grandson & Michael Jackson, "Legacy". At the end he read, as he often does, "Poet's Park, Mexico DF," a good ending. Not a performer, but a good reader of his poems that I always enjoy, just right for a Sunday afternoon.

This convivial event is on the 4th Sunday of each month at 3PM at the Old Songs Community Center, 37 S. Main St., Voorheesville, NY -- with a schedule of featured poets up through June, & an open mic at each gathering.
Posted by DWx at 4:51 PM