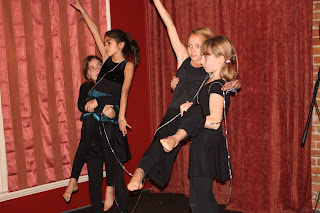 Carol Graser, our host, started off the night with a poem by Pablo Neruda, then on into a night of the cafe's variety of open mic poets, dancers, & Nicole Peyrafitte, the performance artist as the featured poet. The dancers were a troop of 4 young ballet students, "Lily Loveday & her Dancers," who performed a haiku to guitar accompaniment -- so good they had to do it twice, in the grand tradition of haiku performance.

The string of poets in the first half (in addition to the dancers), included "virgin" Tom Pikel with his riddle on the 40th anniversary of the death of Jack Kerouac, & Daniel Wilt whose wild-boy demeanor (& bad form of cutting out after he read) was belied by his stultifying 4-beat meter & rhyme, as well as Carol Kenyon & her dream, David Moak (whose "Compost Composit" is similar to my philosophy of writing), Sue Jefts (good pieces she described as "Fall poems"), the venerable Alan Catlin (whose poem for Erika, "Dwarf-tossing in Queens" was an anti-dote to last month's more somber piece regarding the same waitress), the political/topical/animal piece by Erika Shoemaker, & George Fisher's 2 "older" pieces, both involving memories of his father. 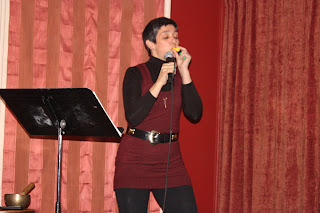 I have been a constant supporter of the work of Nicole Peyrafitte (& her friend) since she began performing her work after moving to Albany in the early 1990s. In fact, she & Pierre were guests at "the Poetry Motel, Hotel, B&B, Convention Center & Spa" the last couple days, & we all drove up together tonight. Besides, my bias always show. Her performance wove songs & poems & topics, a catalpa tree, the sculpture of Augustus Saint-Gaudens, a singing bowl & kazoos, using English & French, even Occitan (also called Provençal or Languedoc) in the poem "To Ride the Line", even the mighty "river that flows both ways," "Mahicanituck." A varied & energetic performance from this bi-continental treasure.

During the break I scooted next door to check out the progress of what would turn out to be the last World Series game this year (even in the 3rd inning the Phillies were losing), & missed some of the open mic. I returned just as W.D. Clarke was finishing his poem. Todd Fabozzi read a couple from his book; James Schlett read a cluster of "Jersey haikus" & "Tipsy;" & I read 2 short "dirty-old-man" poems (as Carol characterized them). 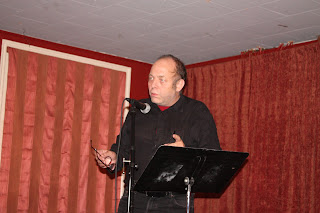 Pierre Joris mixed autumn leaves & a double scotch in a haiku & included "Altars of Light" from his book h.j.r.; Ellen Finn's poem was titled (I think) "Drunk Chunky Donkey in the Dark;" & Nancy Denofio gave us portraits of patrons at the "Brandy Wine Diner, 1959".

Barbara Garro's 2 poems were wistful, nostalgic & had one-word titles, while Carolee Sherwood's poems had long titles (e.g.,"Cantina: Poetry & Fiction in Saratoga the Evening Carolyn Forché Reads from a Manuscript in Progress"). Ariela was another of the night's virgins, with "He's Not Dad," & a poem combining getting out of bed & growing up.

Jill Wickham took words out of a horoscope & re-wrote it, using it as a "skeleton" then read "Speaking of Skeletons." The last 2 young poets arrived late & probably didn't hear the "2 short poems or 1 long poem" limit. George read some travel musings, & then Brian Ellsenbeck also read some journal entries traveling in New Mexico, & another highway poem.

If you go there next month you'll probably have an equally good time, & hear some equally good (or not so good, or whatever) poets, in the grand mix that is an open mic, especially this one on Phila St. in Saratoga Springs on the 1st Wednesday of each month.
Posted by DWx at 2:50 PM

thanks for the pix and the stay at the poetry motel convention center spa & roofing, it was splendid! a special mention for the **** restaurant and their goulash extraordinaire. i think i'll be back! i also like their cornbeef..hum! that would be in march.
M E R C I!!!

Hi Dan - I just tried finding you on twitter, and unfortunately your name is so common... Enjoy your site, as always! Trying to get a ride down to Albany for one of your poetry open mic nights. See you Weds. at Cafe Lena' Nancy