The weather was still Summer as the tour bus circled the block unsuccessfully looking for a parking spot, but the rest of us had a fine time in the open mic & listening to the poetry of the featured poet, Malcolm Willison. Tonight’s Muse was the Albany writer Helen Staley, who left us recently for that open mic in the sky; I read one of her “vignettes” from her prose collection The House on the Rim & Other Stories (Westview, Inc., 2008).

First up to the open mic was Schenectady poet Alan Catlin, who read “It Came from Outer Space” from his brand new chapbook Blue Velvet, poems based on movies, which was the winner of Slipstream’s 30th Annual Poetry Chapbook Contest. Joe Krausman read a timely poem titled “Weather Report.” Sylvia Barnard’s poem was new to me, “Cat Print,” a footprint on the clay from ancient times. Richard Jerin’s poem, he said, was one of devotion, from his many notebooks, “Song to the Stars.” Karen Fabiane read the title poem from her second collection Seeing You Again.  Betty Zerbst likes to sign up at the end the list, at least as she sees it, & read a very personal poem about her medical problems “The Shadow of Death.” My poem, about “the Great American Eclipse,” was titled “Spathe is the Plathe” after the music of Sun Ra. 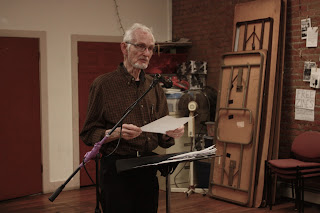 Then on to the featured reader Malcolm Willison, local poet, activist & professor. He started with some Haiku, about mosquitos & about the police. “High Wire Antics” was a poem about the current President, then on to poems about being Brazil, “Lost in Translation,” then to a song lyric written while in New Orleans “Mississippi Rising,” then “Aftermath” about Hurricane Katrina, & back to the Northeast a poem about his parents’ house in Saratoga Springs. “Noon Mark,” the name of a mountain in the Adirondacks, commemorates a friend who has died, “The Weeds of Fukishima” was about the grim aftermath of another storm, then he ended his reading with another memory poem “To the Vermont Ferry.”