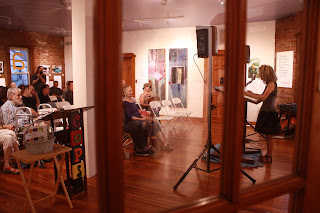 This was the 10th Annual Calling All Poets Marathon, held this year as it has been for a number of years, at the Roost Studios in New Paltz, NY. I had ridden down with Mary Panza, who was on the program, & her Uber driver, 3B — I’ve been sworn to secrecy about whom they talked about & what was said in the front seat on the drive down.

The reading had been going on since 11AM & this was after dinner so the first poet we caught was Irene O’Garden who read some poems about Art, poems from her new book Fulcrum (including reading the definition of “fulcrum” just in case), & some new poems. John Leonard Pielmeier read from his novel Hook’s Tale, then said he hadn’t read his poems in public before, & read his first poem (from age 10) & parodies of Robert Frost, Robert Lewis Stevenson & Emily Dickinson. Karen Fabiane read a couple poems about poetry readings, then from her book Seeing You Again. Greg Correll read emotionally from his book, a wrenching tale of abuse, prison & his father. 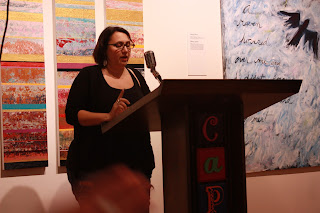 Mary Panza said she was looking back to 1988 when she first came on the poetry scene in Albany, & began with “Zen & the Art of Up-Yours!” then a true conversation about 2 men discussing how to be a famous poet, then a piece about how hope is the worst addiction “Prisoner of a Cardboard Story,” on to "So I Want You To Know,” & a piece she likes to end with about her daughter “The Little Blond.” Cheryl A. Rice is also a veteran of the poetry scene, & she read a poem for her granddaughter “Ellie,” then a modern take on Whitman “I Hear America” (“… whining, snarling…”), a couple other poems, then an emotional piece “Faith” for a dying neighbor.

One of the Elders, Fred Poole read a number of poems, which he let speak for themselves without introductions, including “No” in response to platitudes, a couple about memories of a boardwalk during World War II, others about confronting death “The Glove Compartment” & “Talk,” even a poem titled “Cigars” & ended with “To Be a Hero?” Guy Reed, a personal favorite of mine, read from In the Shadow of Overlook a chapbook about where he lives, the natural world seen through a somewhat cynical eye, &, by request from host Mike Jurkovic, “Bored.” Jonathan Pazer, from the Roost Gallery where this was taking place, read short, trenchant poems from images in the gallery last year. 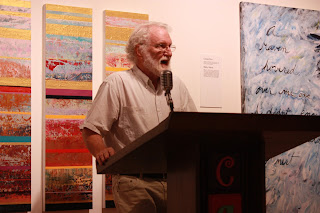 Bill Seaton took us far & wide, to a zoo in Lithuania, & Poland, noticing the missing Jews, a poem with the sounds of crows, another set in the Southwest USA, all descriptive, finding meaning through the images. Bruce Weber used his time to pay tribute to a gone poet/friend Bob Hart, a short bio, one of Hart’s poems & his own tribute poem. Gary Siegel brought the Marathon to an end with a variety of poems, including some with Buddhist images/themes (“Hungry Ghost Nation,” “Take a Look What the Wind Blew In”), even his version of the story of the Garden of Eden “New Translation.”

While the Marathon happens only once a year, Calling All Poets is a regular series at the Roost Gallery, 69 Main St., New Paltz, NY on the 1st Friday of the month, 8:00 PM, with featured poets & an open mic, for $5.00 admission, $3.00 for CAPS members, Roost members, students & seniors.
Posted by DWx at 7:19 PM