Charlie Rossiter is a veteran host of readings, open mics, cable TV interviews, online podcasts, & other literary & arts events. After years in Chicago Charlie is back in the Northeast & recently coordinated the 100 Thousand Poets for Change in Bennington, VT.  Tonight was the first of a planned monthly poetry open mic on the 2nd Tuesday of the month at the Tap House in Bennington, VT. I decided to drive over & support my comrade-in-poems on the inaugural reading.

The Tap House is an informal brew pub with a menu of pub food to go with a variety of beers on tap & in bottles. We were set up in a back room that seems to have housed bands & music open mics. It turns out I wasn’t the only Albany poet to make the trip, Anthony Bernini & Mary Ann Cleaves drove over from Troy, NY to check it out as well. 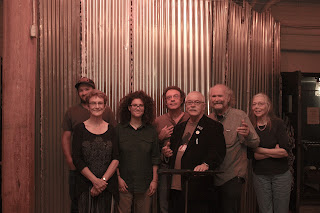 As often happens, I signed up first & read selections from my chapbooks from A.P.D. Poeming the Prompt & Coyote. Sabrina Melendez came down off the hill from Bennington College to perform a slam-style piece riffing off the opening lines of Ginsberg’s "Howl."

Anthony Bernini read a poem about a man & a child caught in a tornado “Held in Place.” Our host Charlie Rossiter began with a list poem “Things to Know About Bear,” then the classic “The Ex,” & from All Over America: Road Poems (FootHills Publishing, 2009) “Outside Taos.”

Maggie is a local; she read jottings from her nightstand, many in rhymes & half-rhymes, on taking things for granted, on hope, on a friend with dementia, & on waiting.

It was a good start for open mic poetry in Bennington. Check it on the next 2nd Tuesday of the month, 7:00 sign up, 7:15 start, at the Tap House, 309 County St., Bennington, VT (across the street from Bennington Pottery).
Posted by DWx at 9:06 AM