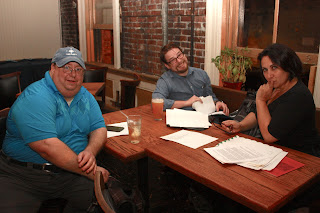 This was the 1st Anniversary of this monthly open mic (last Wednesday) run by R.M. Englehardt & James Duncan. Tonight there were 3 ! featured poets, Don Levy, Thom Francis & Mary Panza & our host was James Duncan & who began with a piece from his new book, “We’re All Terrorists But …”

Brian Dorn read a piece about the history of minor league baseball in the Capital Region “Dog Days of Summer.” I read the 2 poems published in 2: An Anthology of Poets & Writers from the 2nd Sunday @ 2 Open Mic for Poetry & Prose (2016) “Garrison Keilor” & “Trailer Park.” Eveline Augusto was new to me, sat down on the stool & began with an announcement & a lecture, then a series of poems, the first on what she doesn’t like, then “What’s Left” about what she does like starting with a tavern, & a couple more poems, all mostly lists. Julie Lomoe also availed herself of the stool & read a piece about her age, “Sunny & 75.” Karen Fabiane read 2 fuck poems from her book Seeing You Again (2014) “Fuck the Wind” & “I Fucked St. Joan.”

On to the night’s featured poets, with Don Levy up first, & he began with a poem about a character from the QE2 days “I’m a Fucking Poet.” Then on to more recent poems & times, “Hopper Hotel” & “Ode to South Main Ave.” both about his move earlier this year, & a couple of pieces fresh from the headlines “Just Say No to Nazis” & “Hetero Nonsense.”

Thom Francis read “new poems,” at least that's what he said, & who am I to contradict el presidente? Maybe they were new versions of older pieces, like “Paper Messiah” (a “martyr with a pen”), or the piece about mouthwash covering up parents’ drinking &/or infidelities. Then there was “Aftermath” about Hurricane Katrina, then some favorites “Radio Man,” & “Trucker.” All new poems, if he says so.

Speaking of saying so, Mary Panza said I could save some work on my Blog by just saying “see last Saturday’s reading” so here is the link but she also included tonight “Swingset Memories” responding to a poem by Howard Kogan.

Too bad Rob missed this, it was a good one, & we thank him for starting this unique series at O’Brien’s Public House on 3rd St. in Troy, last Wednesday, 7:30PM, or later -- onward into the 2nd year.
Posted by DWx at 5:27 PM