This reading series at the Pine Hollow Arboretum runs from April to November & each September features “performance poetry.” 3 Guys from Albany (Tom Nattell, Charlie Rossiter & Dan Wilcox) has been performing their poetry locally, regionally & in the Albanys of the United States since 1993. 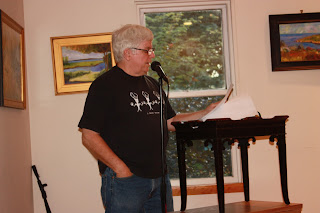 But before the performance the open mic began with Alan Catlin, wearing his 3 Guys from Albany tee shirt, & he read his haibun for Mark W. O’Brien’s Blog, 36 Views of Ononta’kahrhon  then a poem based on lines from a poem by Charles Simic. Howard Kogan read a poem titled “Another Essay on Henry & Waldo,” then one titled “Getting to Know You” & a limerick for 3 Guys from Albany (thanks Howard!). Julie Lomoe in her newly-tinted blue hair read 2 older poems, “Bi-Polar Gaia” & one for the approaching 9/11 anniversary “In Memoriam: Windows on the World.”

Mimi Moriarty read a couple poems for the season, “August 29” (on Hurricane Irene) & a cento “Downpour.” Diane Sefcik’s poems were memoirs of growing up in Brooklyn in the 1950s, “Syrian Bread,” “Scansen’s” (a bar where her family drank), & "Stand 1" (from a series, a story of her brother & sister & a fight). Mike Conner read a seasonal poem “Maple Blight,” then one about Hurricane Katrina “The Water Came & Came.” 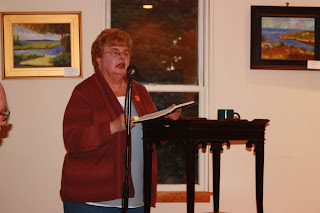 I hadn’t seen Joan Gran in a while so it was good to hear her read a couple poems, both about  bees, “Bees & Things” & on gathering honey “The Bee-Keeper.” Paul Amidon began with a poem about insomnia “3 Hours ’til Dawn,” then one titled “Help Wanted” & a childhood memoir “Street Lights.” Philomena Moriarty (no, they are not related, except by poetry) also had a poem about Hurricane Katrina (& her father’s death) “Corpses,” then a related poem on climate change “Adaptation,” & “A Path to the Sea.” Joe Krausman read a couple of rhyming poems, one on growing old, the other about being at Whole Foods. Sally Rhoades read a poem titled “Don’t Put Plastic Flowers on my Grave,” then a memoir piece about reading as a child “80 Railroad St., Malone, NY.” 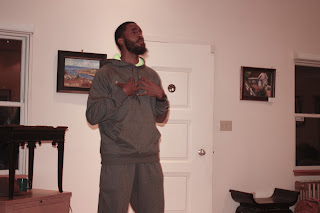 A new face & voice here was Kareem, who said he was from Brooklyn by way of Schenectady, stepped away from the mic to do a performance piece “A Dilemma Called Time.” Bob Sharkey read another of his fortune-cookie poems, inspired by the work of John Ashbery & Bernadette Mayer, “Convex Fortunes.” Making a neat anagrammic symetry, Alan Casline ended the open mic with another storm poem “Red Cell” & one on Autumn.

Charlie & I, with the spirit of Tom Nattell looking over our shoulders, performed a mixed bag of newer pieces & favorites from the 3 Guys repertoire, with Charlie starting off with “Snake Black Solo,” then backed me up on harmonica for “The Blues.” Then into a segment of working-class poems, Charlie’s “Paterson,” my “I Thought I Saw Elvis” & “Going Postal,” & Charlie back for “The Summer I Brought in the Yeast.” He continued with “July 4 in the Year of the Terror” to which I added my response with the same title. On to some randomness, we did Charlie’s “Looking” with the lines on colored strips of paper, & I read “What If…” from randomly shuffled index cards. Our little jazz segment had Charlie reciting “Manhattan Blue” while I stumbled through backup on my alto sax. Charlie’s poem “Love Me Now” was written for 2 voices, while my “love” version of “Labels & Names” required the audience to join in. Mixing humor & politics Charlie read “Even Yuppies Get the Blues” & I, sadly, am still reading “When Donald Trump Farts.” We ended with a complex piece written by Tom Nattell, “Wounded Knee,” with burning sage, hoof rattle & a drum — I hope Tom liked it.