This was the latest in the unique series held at Navona Restaurant in which a poet of renown gives a reading, then is interviewed by Albany Poets el presidente Thom Francis & grilled by the audience. Adam Tedesco is an editor of the online poetry journal Reality Beach & a contributing editor to the journal Drunk in a Midnight Choir, & has been featured at Poets Speak Loud!, the Third Thursday Poetry Night, & other local venues. 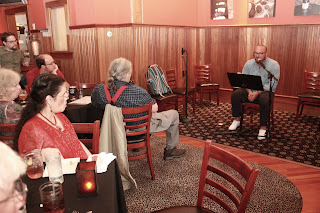 Adam’s poems are always tough to grasp at first hearing — is there “sense”/content? is he just stringing images together? how much is just random music? Not that it matters. The first poem he read was titled “Lingam,” which is pretty obvious, then on to “What Could Happen” with its images of horses. He described “Other People” as his most overtly political poem — perhaps “political” in its broadest meaning. He went on to poems he described as written after Heavy Metal songs, such as his poem “Hit the Lights” but it’s not what I’m familiar with so I can't say I got it. Many of his poems are addressed to some “you.” “Bliss” addressed the idea of freedom & power, but how did trees get in there? Likewise flowers in “A”? “At the Penitent’s Altar” began with images from medieval art, & he ended with a poem about clearing out dresser drawers, like an ending or at least a moving on. 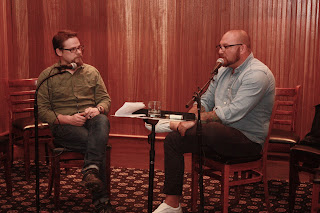 Thom Francis started off the “inquisition” with his usual question, “What got you started writing poetry?” Adam responded that it was about 10th grade when he discovered the Transcendentalists, & acid; sometime later finding Buzz magazine (a local rock zine from the 1990s) & an interview with Henry Rollins & his book list. Since then he discovered drugs, art, painting & experimental electronic music, but poetry became more “feasible” after he had kids.

Questions from the audience ranged from sound or meaning (poetry as sound), about performing poetry (as a state of mind). He said he "thinks in poetry," that his favorite shape is the rhombus because he likes the sound. The discussions ranged on to dream analysis, & back to the issue of drugs, whether to write sober or not.  A free-flowing discussion at the bar.

Check out AlbanyPoets.com for their schedule of events, for the next Albany Poets Presents! & bring your pointed &/or embarrassing questions to ask.
Posted by DWx at 8:47 PM