at the Collar Works Gallery, 621 River St., Troy, NY, with Daniel Nester, Susan Comninos & David Lehman, general editor of the annual anthology Best American Poetry (Simon & Schuster). Fortunately, “Epic” was the title of the exhibit in the gallery, not a description of the reading itself — no Homers or Virgils here. 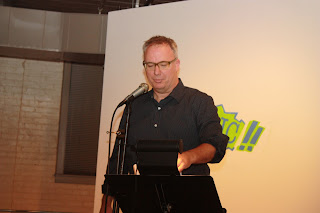 Daniel Nester, Associate Professor at the College of St. Rose, read all the introductions for the 3 poets at once, then was the first reader, beginning with 2 poems based on the disaster movie, “Airport,” & “Gimli’s Lament” in response to, as he said, “the Trump thing.” Continuing the movie theme/subject-matter, he read a moving & deeply  personal essay about his fascination with the movie Caddy Shack (he said he has seen it over 100 times) & his struggles with depression. 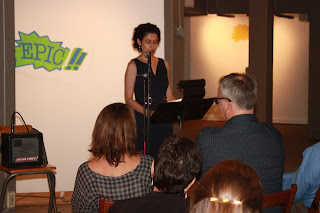 Susan Comninos is also a local poet & a University Lecturer at Siena College. She began with a couple of animal poems, “At the Dog Park Late” & “Bear Spotted in Delmar.” Her poem, “Suddenly,” a dream of a funeral, she described, without explanation, as “the most careerist poem” that she’s written. She continued with a poem mimicing the poetry of Rae Armantrout, “Daylight,” a departure from her usual narrative poems, then a ghazal titled “Creative Still Life,” & ended with a couple of untitled pieces. 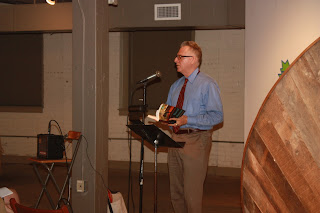 David Lehman, whom Nester had described as a mentor & friend, was not quite so serious. He began by explaining he would be reading from his books, as well as reading some new pieces, starting with a humorous piece “Rejection Slip,” then a translation of Goethe’s poem “Night Song,” a poem titled “Radio,” then one written in Albany from a poem-a-day project “April 15.” From his most recent book, Poems in the Manner of (Simon & Schuster, 2017) “To a Critic” in the manner of Catullus. On to new poems, “Room Key” mentions Troy, then the humorous “Correspondences,” & “2nd Honeymoon.” “Hip versus Square” quotes from Norman Mailer’s classic piece “The Hip and the Square - Notes for an Essay” & takes off on Mailer himself. “Poem” is dated August 17 & mentions the late John Ashbery, & a poem mentioning another dead poet “Poem in the Manner of a Poem by Frank O’Hara” replaces Lana Turner with Hilary Clinton. His series of “Freud Quizzes” are funny takes on psychiatry & everything else it seems. He ended with one of the best translations I have heard of Mayakofsky’s classic poem “Brooklyn Bridge.”