PORTRAITS: An Evening of Poetry, September 15 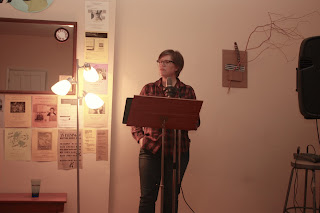 with Howard Kogan & Judy Staber as part of the Word of Mouth series at Second Space in Chatham, NY. Sheri Bauer-Mayorga, la Proprietress of Second Space, welcomed us & introduced the poets, who did 2 short sets each with a break in between; Sheri began by reading Howard’s poem “On Doing Poetry Readings.”

Judy Staber read first. Her rhymed poems  sounded even more old-fashioned with her British accent. She began with one titled “Summer in Grannies Garden When We Were Very Young,” then a piece about her father’s job “Cable Stitching.” Then on to one about an aunt, her first marriage, & then on a loved one in the hospital.

Howard Kogan said his poems were full of others’ voices, & all true. He began with a poem about a couple at the town dump “Gleaning,” then a poem set in the food pantry, & one about a visit from Jehovah’s Witnesses, & one titled “The Year We Go Older.” 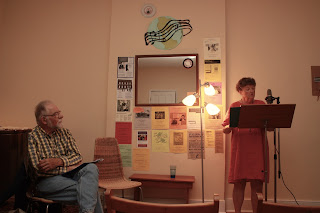 After the break to socialize & find the bathroom, Judy was back, this time with poems from her poetry chapbook Luminous Blue Variable, the poem “Weather,” then one on early photography “The Invisible Mother,” a letter to Charlotte’s Web, a sad sonnet for a son who died at 18-months, another letter of condolence, & the more celebratory “Nativity” on the birth of her grandson.

Howard returned to the mic to read “Old Men Talking” (about water & PFOA), then, from a woman’s point-of-view “How She Sees It.” There was a poem about a family gathering & birds mating on Mermaid Day weekend (in Coney Island), then one in a poultry barn “Perspective,” &, from his General Store poems, “Closing” for the owner.

This was a most pleasant evening of poetry in a space that should see more like this, Second Space, 29 Main St., Chatham, NY — check the website for ongoing information.
Posted by DWx at 8:56 PM