Although the mythical tour bus circled endlessly looking for a parking spot, there were still 10 of us for the open mic with others to listen to our featured poet Teresa Costa. Our Muse was the gone American poet, Thomas Lux (1946 - 2017), & I read his poem “Ode to the Joyful Ones.”

Alan Catlin’s poem “Ice Cream Days & Coke Bottle Nights” was a memoir of childhood & news stories, while “The Widows” was about the town where he grew up. Richard Jerin read a rare urban poem “Brick Walls,” then a reminiscence of someone he knew. 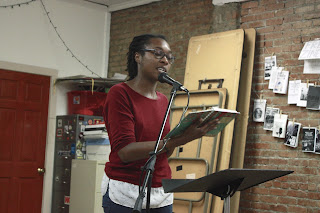 It’s always nice to have a new face, new voice at the open mic & tonight the first of the news was Flowers who read an insistent poem about being independent of love.  Sylvia Barnard read the same 2 poems that she read on the last Monday at McGeary’s (but it’s good to hear them again), “2 Blind Mice” in her apartment, & “Rabbit” (in the city). Rich is not unknown to read at poetry open mics, but it was his first time here at the Social Justice Center in Albany, his poem “Life as Art” was about looking at his woodpile while stoned, & then a longer, descriptive poem about his grape vines “The Vineyard.”Katharine Corp hasn’t been here in a while so it was wonderful to see her come back; she read a sad, emotional poem about her Dad, his suffering after serving in Viet Nam. 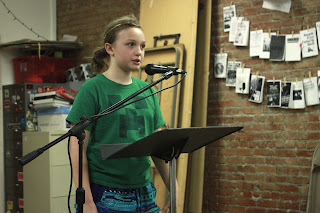 Another new voice was Katherine’s daughter, Juniper, with a poem 2 short poems, one a variation on “Roses are Red…” Samuel Weinstein returned to read a new poem written in England “Storm” with rhymes (sometimes) like a letter to himself. Betty Zerbst also read a poem in rhyme, “My Daddy & My Friend,” then in a different tone, a poem about herself “Natural Habitat.” I ended the open mic with an old poem “Hands Up Don’t Shoot” (in memory of Tamir Rice). 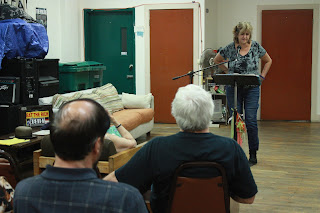 Teresa Costa, our featured poet, hosts the Word of Mouth series in Kingston at the Art Bar Gallery on the 2nd Thursday. She read new stuff mixed in with old stuff, many like short notes to herself, about herself, the life around her, in the Beat tradition of writing about the ordinary. There was usually a touch of humor, such as “Animated Food” based on a realization she was eating her childhood cartoon friends, or the bitter humor of “Threatening Poem” (one word that gets thrown out), or the sarcastic humor of “In Frankenstein’s Mother’s Kitchen.” Inspired by Pamela Twining’s erotic poems, she read 2 short zingers, one from Paris, the other about her well-hung Italian ex-boyfriend; she also read the brief “Electric Orgasm,” a very early poem from high school. Sometimes we learned about her home, as in “Life in the Woods,” & the descriptive “Top Draw Chaos” & “Last Draw Chaos,” or the inventory of 40 pairs of “Darn Socks.” But she could get serious too, such as “Indian Summer,” & “There’s Something About a Wall” (that’s comforting). She ended with the short, funny “Making a Face” that is now easier that she is older.