The house was packed for today's featured poet, Jill Crammond, with a long list of open mic poets, introduced by Edie Abrams. I'd gotten there early before the doors were even open, with a carload of Albany poets, including the perfectly coiffed featured poet, so I ended up at the top of the sign-up sheet.

Seeing the long list I read just one poem (the limit was 3), an old piece I like to do for Memorial Day, "John Lees." I was followed by Carolee Sherwood with 2 new pieces, "The Surprise of 2 Red Roosters" (the surprise was the birds themselves in her poem) & the urban scenes of "Mother Downtown with Bow & Arrow." Dennis Sullivan began with a short love poem, "Musetta," then his more characteristic metaphysical musings of "A Day in May when the Frost Comes" (for his grand-daughter) & "A Disconcerting Fact About Nature" (for Larry Rapant). Lloyd Barnhart also did a poem for Memorial Day, "Collage from a War Footing" on the endless wars & profiteering, ending with reference to the old Pogo cartoon comment, "We have met the enemy, & it is us." Don Levy, whose life is richly detailed on his FaceBook page, wrote a poem about an altercation on FB, "The Right Side." 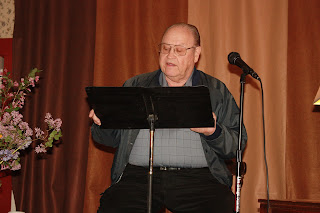 Dan Lawlor read a poem in rhyme written 20 years ago about how everything is more expensive, "Money's Worth," then a newer piece on Death as a card dealer. Tim Verhagen is known for his hysterical, outrageous stories of his family; today we got a heavy dose, with pictures, of "Grandmama," "Things Mom Used to Say When I Was 6 Years Old," & the poem about his brother, who, like grandmama, took many years to die. Edie Abrams reprised the poems she had read Friday night -- no apologies necessary, Edie, it was good to hear them again. Mike Burke said he pulled his poems "from the vault," the first a character study of an old guy & his Yorkies, then an angry rant on reading the ages of the military killed in Iraq. Brian Dorn brought back rhyme with a love poem, "Luck," & a poem about Schenectady, "The City that Lit Up the World." 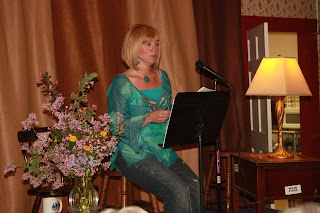 Mike Burke introduced the featured poet Jill Crammond, explaining that he earned the honor by beating Dennis Sullivan in a leg-wrestling match -- I would have paid to see that. Jill read poems from her new series about Mary (of the Blessed Virgin type), explaining that she thinks she should become a nun, having heard the voice of the "Blessed Mother." Just listing the titles will give you a sense of what these fine, poignant poets are about, beginning with "How to Wear Rosy Glasses," followed by a couple of list poems, "Mary Goes Camping" & "Mary Prepares for the Storm." Then "Mary & the Greener Pastures" & a trio about a broken heart, "Mary Writes a Prayer," "Mary's Terrible Heart" & "Mary Writes a Personal Ad." Some of these were written for the Tupelo Press poem-a-day project, including one I had suggested to her, "The Pope Writes a Letter to Mary." "Mary & the Commandments" raised the possibility of more than 10. "Mary Waits for the Grass" & "Mary Kneels in the Garden" had her comparing her yard with the "better" yards of her neighbors. Ex-s were coming out of the woodwork in "Mary Does Not Return the Affection," & she ended with a poem from a sub-set of the series, "Mary & the Deer, Part 3." There are lots of "you"s in her poems, like advice, on gardening, on relationships, & her poetry is refreshingly about as far from abstract as a poet can get ("no idea but in things" indeed). It was a one of the best readings in this series, tender, ironic, humorous, -- & did I say her hair was perfect?

Usually at Sunday Four Poetry the featured poet is the last one to read, but due to the packed house the open mic continued. Tim Dwyer is scheduled to read here next year, but showed up today to check out the scene, giving us a sample with 4 poems from his manuscript on Irish themes, "Between 2 Shores," one poem, "Mid-Summer," drawing parallels between the American Indian battles with other tribes & the Irish conflict. Lee Slonimsky had driven up from Red Hook with Tim Dwyer, read 3 sonnets from his book Logician of the Wind with a variety of strange themes: one from the point of view of an atom in a girder in old Yankee Stadium, another at Vesuvius, & a 3rd from the point of view of Pythagoras.

Is it me? Did you ever notice that whenever there is a long open mic list, some poets toward the end of the list tend to read the longest poems? Obeeduid read 3 poems, abstract, philosophical, & long, his last poem, "Anything Can Happen," in multiple parts, was as long as the other 2 combined (& one of those was long too), sort of a "half-feature". Sally Rhoades began with a poem from a visit to D.C., "High Water Mark," then an old poem "The Cardinal" & a recent dream poem "I Could See My Mother." Alan Casline, after some announcements, read poem about a cast-party for a chair (!), then another from wandering around Nashville, & then his poem to the late Jim Williams, "Good-Bye to Shadow Poet."  Joe Krausman began with a fable in rhyme, "Apples," then a humorous piece written many years ago, "My Poem Shop." Bob Sharkey read a piece about the issue of re-building our cities & covering over memories of what the city has been, then "Flying High" about a trip to visit his new grand-daughter & finding a poem in a box. 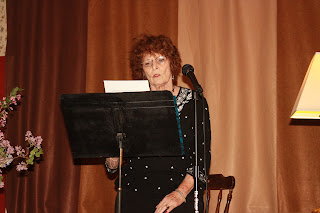 The last 2 poets rarely make it to open mics so it was a refreshing end to the reading by hearing their work. Sharon Stenson's first poem, "The Chickens" was about freedom, then a poem of lost love, "Tango Del Morte" & a portrait of 4 year old playing a piano for her teddy bear, "The Truth About Mary." Faith Green's poems were short, with quirky titles, "Irregular Yardstick," "The Deja Vu of Love," ending with 2 haikus.

There is one more in this series of Sunday Four Poetry, at 3 PM, at the Old Songs Community Center in Voorheesville, before they take a summer break, then return with a new schedule for the Fall & into next year (including Tim Dwyer).
Posted by DWx at 10:32 PM