This is just an open mic, no featured reader, held most months of the year at the Arts Center of the Capital Region on River St. in Troy, NY for writers of prose & poetry. The hosts are Nancy Klepsch & me, DWx.

Brian Dorn has gotten brave & signed up first, & started with a poem on poetry, "I Surrender," then a love poem, "Clear Into Space," & his take on evolution, "Monkey Bars." I followed with some poems for the day, "Mothers' Day Meditation" & "Whose Mom is That?" Both of Howard Kogan's poems pondered death, the first, "The Sense of the Question," from a workshop with Bernadette Mayer, then "The Life We Want." Inna Erlich brought some translations from the Russian of other writers & asked me to read them for her, a short prose piece, "The Blue Wagon," by Inna Goukhman, & a short poem (actually a song) by Bulat Okudzhana, "Open Door." Harvey Havel read a quirky fictional piece about a woman who buys a new pair of eyeglasses then finds lots of others wearing the same style. 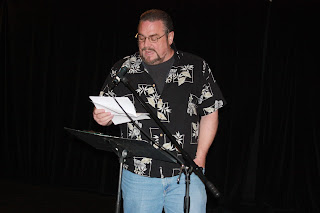 Mike Connor began by reading Baudelaire's "Be Drunk" (Mike has been hanging out at the School of Night), then on to a couple of his own poems, "The Last Few Moments" about "nothing" he said, & a poem about cilia, "Paramecium." Co-host Nancy Klepsch read an old poem based on a Swahili proverb, "The Daughters of Lions Are Lions Too," then a poem by Naomi Shahib Nye, "Kindness."  Sally Rhoades read a poem about her mother, "Woke Up," then a segment of a longer prose piece, "Mountain Ash," & the tender "A Trip in Home."

Tim Verhagen can be sexy & funny & outrageous as he was today with "The Pool Boy," then "Grand Mama" (who is close to death "…for years"), & "Old People." Kathy Smith also had a poem about her mother, this about visiting the Cohoes Falls on the way to visit her Mom in the nursing home, then a poem about struggling to write about the World Trade Center destruction.