I was away last month & missed the open mic but had to be here tonight for the featured poet Mary Panza, whom I've known since she was a young poet (& I guess I must've been younger then too) making her poetic debut on stage at the QE2 open mic. I had no idea who the other featured poet, Dorothy Randall Grey, was but I'm glad I was here to hear her too. But first a few of the flock of open mic poets.

Our host Carol Graser began with a poem by Tu Fu, who has so many. Rodney Parrott read poems from his novel The Wanderer, sounding very influenced by the Asian wandering poets. Brian Dorn brought us up into the 21st Century with a poem on technology & war, "Back in the Day," then one on environmental issues "Another Step Forward." Barbara Garro's poem "Hope" was, she said, about "having tea with Rumi," & a long tea-party it was. Carolee Sherwood was finally back here with 2 parts from a new, experimental poem with surreal characters like an avalanche & her familiar images of crow & duck, even a dragon boat -- something to look forward to. Aaron, who was introduced as a high school student, read a dream sequence/fantasy with random rhymes on being alone. 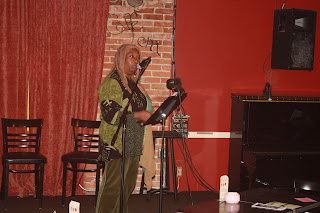 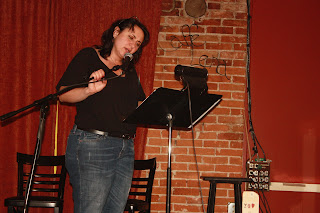 Back in Caffè Lena was Mary Panza. I say "back" because Mary was the featured poet here many years ago soon after Carol started the poetry open mic & as Carol put it Mary almost ended it with her don't-fuck-with-me poems & attitude. Not much has changed as she demonstrated by starting with "Fuck the Giving Tree." She went on with making it better "In a Post-Partum World," then took down "The Tattooed Crowd at Day Care." Mary writes a regular column for the AlbanyPoets website, "Housewife Tuesdays" & read the poem behind the columns, "Because of You I Believe in Housewife Tuesdays" & read a recent column about the pajancho. Next was one of my favorites, "And the Women Cooked." She ended with a trio of Mary Panza classics: "This is Not an Angry Poem…," "I Dream of London" (based on the film Wings of Desire) & the to-the-point "The Cock Kicker Manifesto."

Of course we needed a break after that, then back with Carol Graser reading her poem "Root Canal." Peg said it was her first time, read a poem about a kayak trip ("Fresh") & a tree branch ("Fall & Recover"). Nancy Denofio's long piece "One Man" was in 3-parts, over time. Scott began with a rambling apology for not being here in a while, then read 2 long pieces about being enthralled by beautiful woman. Alan Catlin read a piece from his "The Life of the Poet" then another about college characters & pranks, "The Season of the Witch." Sally Rhoades began with the poem "Traveling Somewhere" then an elegy for a friend "Is that a Rain Cloud Passing Over?"

Don Levy did a poem about guns at school, "Shoot & Tell" then bit of New York City history with "Love at the Automat." I followed with a poem about the shootings at Kent State & Jackson State colleges in May 1970 ("44,000") then the very short "Old Hymn." Judith Prest's poem "April Morning Southeast Connecticut contrasted being at a poetry retreat during the Newtown shootings, while "Poet's Prayer" was about herself & her mother. Tim Snider celebrated the coming of dandelions in his poem "In Like a Lion," then recited the Winter poem "Window Gazing." 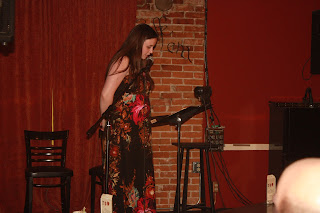 The night ended with a quartet of young poets, beginning with Maria, her first time reading, with her poem "To Anorexic Girls" & a tender poem "to a special woman" comparing her to a flower. Robin Mendoza's poems were strange, quirky stories of himself & of his friends. Robbie Held's poem "Lunch Sandwiches" was also stories of lunch with her friends. Dylan's first poem was also about a friend, full of strange, funny images, while his second piece was serious, abstract musings.

The open mic at Caffè Lena has survived since the first reading by Mary Panza & i suspect it will continue to survive & thrive on the 1st Wednesday of each month, 7:30, $5.00, on Phila St. in Saratoga Springs, NY. Eclectic featured poets & an open mic for the community.
Posted by DWx at 4:31 PM