Live from the Living Room, May 8

There were actually about 5 more folks in the living room of the Pride Center in addition to the poets that read this night, so the cozy was getting crowded. As always our host was the straight-friendly Don Levy, who had touted this as "Haiku night." 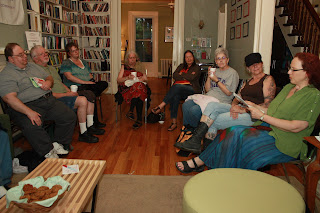 The featured poet was Tess Lecuyer who goes back to the roots of the open mic scene at the QE2 & she began with a poem that dates from that era, "Ahab's Leg." She said her reading set tonight was determined by a "random fistful of poems" she grabbed heading out the door, but a good selection it proved to me (& nary a haiku in the bunch). The next 3 poems were her signature crow poems, which are often rain poems as well, "Crow Sonnet" (with the line "the rain is coming"), "This Sound," & a poem of a skyfull of crows, asking questions & rain. Next was a poem about lilacs & a Maypole, "May Day Chant" then 2 poems set at Camp Little Notch, the seasonal romp "Wild Pumpkins" & "Camping at Little Notch with Irene" (the Hurricane, that is). She ended with a nod towards Oz, the poem "After Dorothy Has Gone." Tess is one of the poets here whose work I never tire of hearing & whose new work is often a surprise, never the feeling that she is just re-writing the same poem over & over again.

Then on to the open mic, with the first poet Delilah, who had tried us out last month. She read a long series of haiku on issues of gender, sex, religion, introduced by a discussing having learned the form in school & being a bit confused about it -- isn't that what school does to poetry, confuses us? AC Everson read from a new work-in-progress, "Heaven Sent," a segment about a weekend of music, friends, a gift sent from above from her Mom. I actually attempted some Haiku, the "American" version of the form, from my series of "Portland Haiku" from the 3 Guys from Albany tour in 2000.

Sylvia Barnard read her recent attempts at the Japanese version of the form, a couple of Park Haiku, then a May Day poem in rhyme, "Morris Dancers." Sally Rhoades read a tender poem "Dream Afar My Lover." Our host, Don Levy, ended the night appropriately enough reading from Gay Haiku by Joel Derfner.