In a more informal, intimate arrangement we were gathered back in the back room of McGeary's for another last Monday edition of Poets Speak Loud!, hosted by Mary Panza (il papa, Thom Francis, otherwise pre-occupied at home).

First poet was Sylvia Barnard with a love poem, "The Last Voyage of an Old Sloop," then a poem about crossing the Hudson River, on a bus. I read a new poem about women in combat & military drones, "Nurture or Shooter," then an break-up piece "Opinions." Annie Sauter made the trip back to Albany after being here for WordFest, read a long-line breathless rant (seems to be her style) "Drunk at Dreamtime." 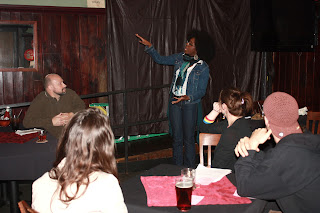 D. Colin was the featured poet, a member of the Nitty Gritty Slam team, she is a favored poet of mine; I had booked her to read in 2011 at Poets in the Park.  She began with some of her signature pieces about Haiti, a wonderful untitled poem inspired by & celebrating the women of Haiti, then on to another Haiti poem, like a love poem, & a free writing piece from Poetry Month that also connected back to Haiti. Then she defiantly celebrated her hair, a luxuriant afro. "The Voices" was a poem about questioning herself, making choices. Another poem sang the praises of "little black girls" & she ended with "We Are Beyond It," an angry poem about the Haiti stereotypes, but also in some sense an anthem. Good work, strong performances of real poems. 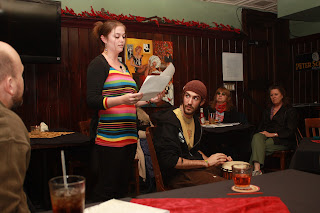 Angie is a new volunteer at AlbanyPoets & a read some of her notebook jottings, "Hard Times" & "The Baffled State," both about her feelings. Brian Dorn began with his poem "Poetry is Sexy" (for sure) that he said is used in the UK by poet Peter Thomas to promote poetry in the schools, then another poem "Playing for Keeps." The poet known as RainMaker said he had done the 30/30 of poems, read a weaving, spinning piece "Synaptic Afro" with the great line, "masturbation was the first iTouch," then a poem about his grandmother coming to the USA from Jamaica. Nicole finished off the night with poems from her iPhone, "I'm Hungry" (advice on how to be a successful black woman) & the rhymed love poem "My Passion."

Sometimes on the mic, sometimes off, Poets Speak Loud! is a wonderful place to be on the last Monday of any month, at McGeary's on Clinton Square (near where Herman Melville once lived) -- see AlbanyPoets.com for information & a wonderful calendar of poetry events.
Posted by DWx at 7:38 PM

Hi Dan, I just wanted to make a correction to your blog. I wrote "Poetry is Sexy," but Peter Thomas does use my poem (Poetry is Sexy)to promote poetry in the schools throughout the UK. Keep up the great work! ~ Brian Dorn

Thanks Brian -- sorry about that, correction has been made.
Peace.