One of the rare 5th Tuesday Slams at Valentines & the visage of il papa Thom Francis has yet to surface from beneath the pile of diapers & extra laundry, but somehow the Slam goes on. Christopher the Poet was the host for the open mic while the rest of the gang rounded up judges for the Slam. In the audience (& a particularly hard-ass judge from her experience with the Providence Slam Team) was Carrie LaCroix Pan who hadn't been here since Autumn.

First up was RoseMarie (who also did the Slam), with a relationship piece in rhyme, "Why Did I Give Up On Us?" Avery read a piece about the mega-coincidence of the Laura Buxton(s), a great pile of words, but read much too fast. K.P. (Kevin Peterson, of course) read his classic Stewart's hangover poem ("Sausage Egg & Cheese Defined"). 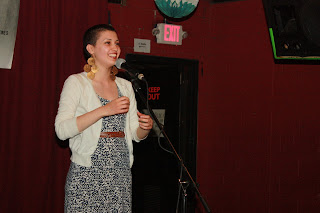 Daniella Watson's poem was a Slam piece about urban violence, invoking the spirit of MLK & probably would've done well in the Slam portion. Algorhythm didn't Slam either & his piece was about trying to pay with a $100 bill at Dunkin' Donuts (duh!). I played off the up-coming anniversary of the Kent State/Jackson State massacres in 1970 with an older poem from 2010 "44,000." & that was it.

On to the Slam, with K.P. as the Slam host -- 5 poets, 2 rounds, all 5 both rounds, then the final 1 to 1 round. It was a low-scoring night, only 1 "10" (Christopher the Poet) due to some particularly tough judges & the absence of some particularly uncritical folks who often volunteer as judges. There were also a majority of new Slammers, Rose Marie, Billy & Michael.

When the white boards were all whiped & the tallies counted off on Avery's fingers & toes, Rose Marie was 5th, next was Billy, then Michael. Victorio & Christopher the Poet went head-to-head for first place, with Christopher taking first with his signature "Dear Future Son or Daughter."