Every third Thursday is special here a the Social Justice Center, but I was particularly pleased to have as our featured poet one of the "greats," Bernadette Mayer. Back in the late-1970's I lived in the East Village in New York City & attended many events at the St. Marks Poetry Project, when Bernadette was there giving workshops. I never took her workshops but read her books & I may even have a copy somewhere of the mimeographed zine she edited "United Artists." But before I go on with the history of modern poetry in the late 20th Century, I need to finish this report. Tonight's muse to bless the night was the mid-20th Century (she died in 1970) "condensery" poet Lorine Niedecker.

& first up for the open mic was another of the greats, Alan Catlin, with a poem about the 1960's, "Sunshine Superman," a portrait of a drug dealer. Phil Good said he brought some tiny poems, didn't know about the one poem rule, read instead "Ellie's Other Weather," a tale of country living. Mike Connor's poem was titled "Rolling," on spinning through another day. Brian Dorn said he likes to read poems appropriate to the Social Justice Center when he is here, so tonight read an anti-war poem, "Out of Whack." Joe Krausman has been reading a book about memory to talk about it for the Friends of the Albany Public Library noon-time book review, so he read a poem on memory, "Losing It." K.P. (Kevin Peterson) tried out a new performance piece about playing Tetris to measure a person's true abilities. 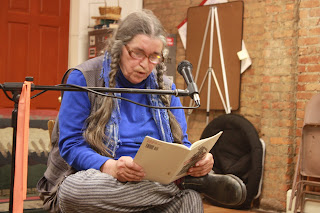 Bernadette Mayer now lives in East Nassau & her new book The Helens of Troy, NY was published this year by New Directions in their new Poetry Pamphlets series . She read a selection from the book, starting with a poem about her neighbor, Helen Green, who was the inspiration for the project, then to the youngest Helen in the book, "Helen Willett Sonnet." The poems are based on interviews with each Helen & includes a photo of each. One of the oldest Helens is "Helen Worthington Bonesteel," a short poem of memories of going to school in a sleigh, & of Troy on fire, as did "Helen O'Neill Davis." "Helen Fuller" is more of a list-poem description. She ended with a poem she said she wrote for me, her "social justice poem -- maybe," "I'm Glad it Was on My Porch," about a warbler on her porch. 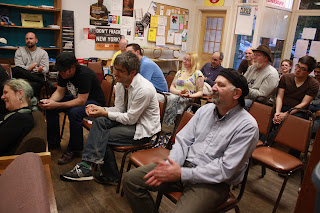 After the break, & the accumulation of a fewmore open mic poets, I read my poem about the Gulf oil spill, "Pindar's Shrimp." Jacky K. said her poem, an unsettling, anaphoric piece playing on "Simon Says…" about sexual predation, is untitled, or might be titled "Didn't Say." Sylvia Barnard read a series of 8 Haikus, "Tulip Festival 2013, Albany, NY." James Belfower read from Hannah Weiner's Open House, Day 52, which mentions Bernadette. Matthew Klane, a local "condensery" poet read what he called "Some Words on the Street," short pieces like definitions. Jan Farrell was up next but then couldn't find her poem, so Alan Casline took over & read "Lap Water Off the Roof…" a description, perhaps, of Bernadette's house & garden. Jan came back having found what she wanted to read, a story poem for Mother's Day, "Dear Mom," a jobless man calling home. Kenneth Williams, a new voice & face, snuck in to give us a little baseball history, talking about Jackie Robinson & racism. Although he had gotten here earlier, Kenyatta Jean-Paul Garcia signed up last & so was our final poet for the night with some abstract philosophical musings on language & truth.