Poets Speak Loud!, May 27 This series is held on the last Monday of the month & so each year it falls on Memorial Day in May. Today we gathered in spite of (or because of) the Holiday in the back room of McGeary's, our busy, attentive waitress was Victoria (a real cutey) & our host was Mary Panza (another real cutey), who was also one of the night's featured poets. But first some open mic poets, eagerly clutching their poems in their fists.

Sylvia Barnard was 1st with 2 poems inspired by her front lawn, Washington Park, "The Morris Dancers" & a set of 8 haikus for the Tulip Festival. Then, abruptly, Lake Sally was created in the form of Guinness, an extra task for beleaguered Victoria. Brian Dorn strode across the lake to read 2 of his rhyming poems that folks have been enjoying, "Agitated" ("…over you…") & what he said was for our featured poets Avery & Mary tonight, "Poetry is Sexy." Joe Krausman's 2 poems were both inspired by birds, the first "People Left Hanging," then a poem written in Yiddish by his uncle, translated by Joe, about a bird in a cage. Cheryl A. Rice read a new poem combining images of an old doll & a medical exam, "Biopsy." 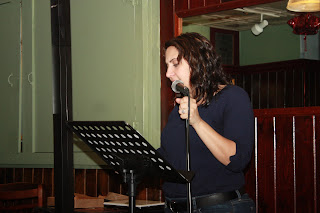 One featured poet, Avery, introduced the other, Mary Panza, both of who celebrated a birthday this past week with a tequila pub crawl, the story of which did not make it into this Blog (to protect the innocent, if there are any). In any event, Mary's set list tonight was essentially the same as her reading on May 1 at Caffè Lena, so go check that out here.

I was the next open mic poet up with a couple of poems for the day, "Memorial Day 1999" & the more poetic, "Patriotism." Karin M-T made an all too-rare appearance at an open mic, but instead of her own poems read 2 exquisite poems by her friend Victoria Moore, who died 8 years ago, "Dog & Pompeii" & "Report My Passing Krakatoa" (I recall a marvelous reading I did with Victoria & a bunch of other women poets at "Miss Mary's Art Space" near the beginning of New Scotland Ave. many years ago). Sally Rhoades read "What If My Father Was a Poet" for fellow poet Mike Burke, then the related "My Mother Was a Waitress," ending with an elegy for a friend, "Is That a Rain Cloud Passing Over Me?" A.C. Everson was the last of the open mic poets with her self-portrait, "Scrabble Slut." 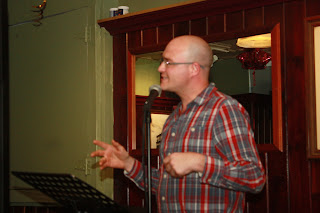 The final feature & final poet of the night was Avery with what he attempted to describe as pieces on the Chakras & Kundalini Yoga, but becoming somewhat incomprehensible in his description. The first piece, "OM, a Kundalini Experience" was performed in very un-OM pressured speech. The 2nd piece, "My Kundalini Rising," was prerecorded, using cuts from the Grateful Dead, Dave Brubeck & selections of Soul music, & his reading of the text sounded like an announcer doing a commercial for a New Age venue like Sounds True or the Omega Institute, in a throaty, overly dramatic radio voice. In addition to being a bit tedious ("soporific" said one of the other poets in the audience), the pieces were marred by notably uninspired phrases such as "unadulterated creativity," "divine union," & "writhing with ecstasy." True spiritual experiences are rendered best in images that suggest what the person felt & saw, rather than in the abstract language of a sales pitch.

Spiritual or not, Poets Speak Loud! happens on the last Monday of each month at McGeary's on Clinton Square in Albany, at 7:30PM, with featured poets & an open mic for the rest of us. Check it out on AlbanyPoets.com.
Posted by DWx at 6:36 PM