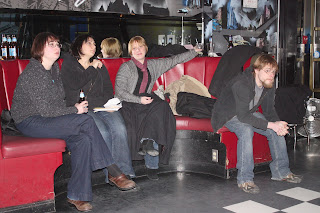 The second event of this double-header night was up Lark St. & on to Central Ave. at the Fuze Box for the monthly open mic hosted by RM Engelhardt (& celebrating its first anniversay), who started off with his poem "When" looking for a perfect world. Unfortunately, throughout the night we were plagued by a bass-heavy sound system & loud music playing from the bar. Some of us dealt with the mic by not using it & speaking loud, but the music from the bar played on.

I read 2 "Summertime-California" poems, the recently published "My Sather Gate Illumination," & the 1969 remembrance, "Summer in California." Carolee Sherwood wrote a new piece today, untitled, a fantasy of a tailor & pearls, then an alphabet poem, "Eaten Alive, a History of Affection." Jill Wickham's first poem was about a Valentine's Day visit to the cemetary, "The Husband Recalls a Recent Holiday The Feast that Almost Follows;" about her second poem ("The Doll House") she said, "I think this is about a Barbie doll, I'm not sure." 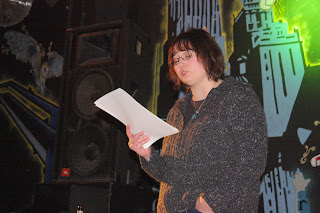 The night's featured poet was Rebecca Schumejda, from Kingston, NY. She gave us a sampling from works-in-progress & from her published chapbooks. First from a new series on the Bill of Rights, "Amending the Heart": family poems, fixing Xmas toys, titles like "Unreasonable Searches" (asking questions), & "Warrant" (summer sex). Then some Winter poems from a new manuscript about a pool-hall, about characters who hung out there, alcohol & gambling, but love as well, tight narratives I've heard before & look forward to having on my table. She read "The Evidence" from her new chapbook, The Map of the Garden (verve bath press, 2009) & finished with "Four Months from Now" Falling Forward (sunnyoutside, 2008). I'm a fan.

RM Engelhardt continued on with ruminations & instructions on what poetry does in "Suture." Shannon Shoemaker recited the melancholy, grey "Valentines Day," having left home without her printed poems. Mary Panza jumped right into with "Roofing & the Art of the KIss." The group known as Murrow (Thom Francis & Keith Spencer) finished off the night with a couple poems with guitar obbligato, including the grim disaster piece "Aftermath".

Vox is each last Friday of the month at the Fuze Box on Central Ave., 8PM. It can get raucous.
Posted by DWx at 12:21 PM