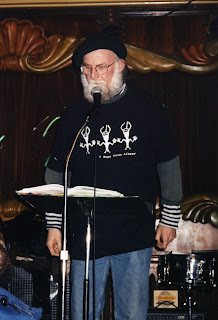 & the annual Tom Nattell Tribute Open Mic & Beret Toss, at the Lark Tavern. Back in January 2005 when this series began, Tom was to be the first featured poet. But he was dying of cancer & stepped away from us that morning. So the open mic that night became a tribute/celebration/wake, & we've continued it each year since. Tom was a force behind the beginning of Albany's busy poetry scene & his presence is felt wherever the poets gather. The last Monday was chosen as the day for this reading because that was the day that Tom did the open mic at the QE2 in Albany for 11 years in the 1990s. And I am honored to be the host each year in January at the Lark Tavern & celebrate in a way Tom would approve. Tonight was the 5th anniversary of this monthly open mic. "Star dust is us," Tom said.

Throughout the night I interjected some of Tom's poems, post cards & 3 Guys from Albany recordings in between the other poems so he could be at this event, as indeed he is. So I started the night with the short elegy, "Theology 101."

Sylvia Barnard has recovered from her jet-lag & read a poem about her visit to Istanbul, then "Learning to Read," a sequel to last month's birthday poem. Then Tom with a couple of his memorized hip-hop poems, both untitled, one about Hunter S. Thompson. Julie Lomoe's poem "Golden Years (a dialogue with my inner critic)" was written this morning & is on her Blog.

Jason Crane's "Long Haul" mused on the hard times driving big trucks, & his "Robbie Burns Hat" was an account of his attendance here at last year's beret toss. Ed Rinaldi also had a poem he wrote today, "Riding with the Great Mother & Kerouac into the Mountains," & another from a stint working overnight, "I Just Bought the Balloons." The first of tonight's "virgins" was Tim Ervin with "Saturn's Supper" referencing the classic myth, then "Maya's Revenge" that referred to a Goya painting. 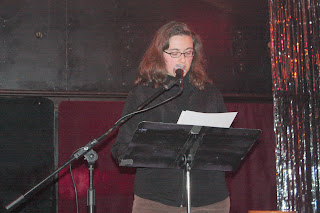 I read my elegy, "Chasing Tom," which has just been accepted by the Paterson Review. Our second virgin, Brenda Rusch, kept it literary with "Mini Loy Jotting Down Notes in Philosophy 110" then a tribute to e.e. cummings. She was followed by Murrow (Thom Francis & Keith Spencer) with 2 favorites, "she's an angel..." & the "new day/turn the page" poem. RM Engelhardt read the poem he wrote in 2005 when Tom died, then "Think Beautiful" & "Suture" (love, words, fucking).

Carolee Sherwood swept us away with "Hologram" on a hurricane & a rogue wave, & read an untitled piece from her notebook that ripped the heart out -- watch for her as a future feature. Jill Wickham confessed she has 8 (!) cats & proceeded to "After Hearing a Concert & Rescuing a Stray Cat the Bickering Couple Concede What They Have Done" (definitely the longest title of the night), then a 2-part his/her anti-valentine/anti-love poem (if it had a title, I missed it).

The poet who signed up as Avery has been back for the last few months with his ironic/sardonic/hiponic (I just made that up) poems; tonight, the portrait of the girl bending over, "What Were You Looking For Anyway," then a sexy blueberry surprise. Shannon Shoemaker got us hot with her sex=love poems, the brand new "I Woke Up" (after sex & she's gone), & the love-addict's lament "Brought Low."

Cheryl A. Rice's poem "Exit 17" could've come from the AAA magazine with it's precise descriptions of the sights along the road to Scranton, but of course there is more to it than that. A.C. Everson's poem "New Year's Blues" was wishes & dreams on 2009's blue Moon. Sally Rhoades brought us back with "Tom Nattell." Now, I often make mistakes, as many readers of this Blog have noticed & tonight was no different, but this mistake could've been fatal (as a regular patron of Tess' Lark Tavern): I mistook Alex Albino's elaborate signature on the sign-up sheet for a cross-out. Good thing Mary Panza corrected me, otherwise we would've missed her 2 poems, "Pestering" where love/desire is like a pimple, & a poem for the year of change, "Declaration of Independence, 2010." 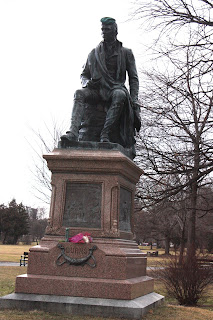 Sometime during the night Thom Francis passed the hat & the Albany poets came up with a generous donation to the Homeless Action Committee -- Thanks, folks! -- & a birthday cake, complete with candles was brought out -- a day early -- & I proved I still had the breath to blow (the candles out). & my best present was a surprise visit from my favorite waitress, Nicole, (who had the night off) & 2 deep hugs -- I'm still feeling them.

Then, on a wonderfully warm night for January, the motley poets meandered to the Robert Burns statue for our annual ritual in memory of Tom Nattell: a candle, a bouquet & the "toss" of the green beret to the head of Robert Burns, where it magically stuck! The picture shows it as it was the next day.