The scheduled featured reader for tonight had to cancel & a last minute call from Carol Graser recruited Don Levy, then Don recruited me to be his driver (not that I wouldn've gone anyway, but now at least I had pleasant conversation on our ride). Our host, Carol Graser, began with a poem by Nicole Brossard, then on into the open mic. Sue Jefts was first up with 2 new seasonal poems, "A Prayer for January," & "Refrain" with geese flying over. Josh McIntyre's 2, characteristically short, poems were "In Tune" & the tender love of "Fasting." Alan Casline read another of his series of poems based on the I Ching, this one titled "Echoes Going By" based on Hexagram #12. Victoria (a virgin 1st time reader) started with an tiny untitled piece, then "Anne's Lace" on the flower. Another new poet (pictured at left) was Anastasia with an untitled poem of memories of past summers, of hands, of coffee in Berlin. 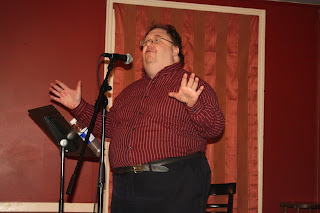 The "understudy," Don Levy, took the stage as the featured poet & began with a new poem based on 42nd St., "Broadway Baby." "Captain Ralph" was a memory of childhood TV shows, followed by pondering "finding God" in "The Theology Dept. Lost & Found." At the Washington Ave. YMCA, Don was working-out with the Mayor ("Sweating with the Oldie"), then was in shape to be an "Underwear Boi Wonder." He thought about the days at the QE2 in the "Old Tee-Shirt," bashed the State of Maine for repealing the law permitting gay marriage in "On Golden Douche Bag" & the random use of the word "gay" in "My Gay Toaster Won't Let Go of My Eggo." He ended with the short poem on "The Fine Art of Conversation." 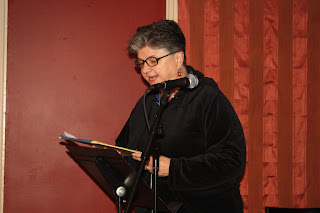 After the break George Fisher read a couple new poems about Albany, one at the Corning Preserve, "Hills" & a bleak poem on a community garden in evening. Margaret Bryant's poem took place in a nursing home, "The View of the Choir" (she is pictured at right). Barbara Garro summarized the life of Robert Frost in "Living a Poet's Life." Another comic interlude (after Don's reading) was Austin Halpern-Graser with a stand-up routine on his phobias & on potatoes. W.D. Clarke's poems were inspired by the 2nd California gold rush in the 1970s, "California Gold Fields" & "The Ballad of Robert Brill." Nancy DeNofio's "Dancing in the Sunlight" were memories of sea & sand by an old woman in a rocker.
Jill Wickham brought us to Spring & mud with "A Stranger Walks Up to a Mother Playing in the Park" &ap; the shopping story "Because My Husband Refused to Admit to the Gravity of Having My Daughter Roam Free in the Bookstore." Carolee Sherwood's 2 poems were inspired by her home State (see Don's poems), "Slip-Knot" & a poem about the humpback whale. I wore & read "My Scarf" then a poem referencing the Adelphi Hotel, "This Dream is Not About You."

Jessica Barrett read her prose narrative from a community newpaper about an iPod, punning on i-life. Ellen Finn's poem "One of those Days is Every Other Day" was about locking her keys in the car yesterday. Sally Rhoades was the night's last reader & read a poem about the Summer, then "Blue Grey on the River Today" about riding on the train.