This is the first of a three-readings series featuring student writers from the College of Saint Rose, held at the UAG Gallery on Lark St. in Albany, NY. The readers were Scott Wheatley, a graduate student in the English Department, and Michelle Cabral, an undergraduate in the English Department, reading from non-fiction writing projects. Also featured was special guest Daniel Nester, whose recently released How to Be Inappropriate has been praised as a "deeply funny new collection of booger-flecked non-fiction" (Time Out New York). They were introduced by Kira Brady.

Michelle Cabral read 2 related pieces from her Senior project, the first titled "So Over the Rainbow: the Duff Fragments" which described, defined & complained about being a "Duff" in school but was really about coming out as a lesbian, mixing humor & school angst, the eternal quest of finding out who you are. The second, untitled, piece was also a memoir about coming out, on the phone with her parents. Both pieces sensitively done, with gentle humor, looking back from a better place.

Scott Wheatley read from what he described as a continuation of his senior project at St. Rose, a memoir moving from childhood & a Winter outdoor birthday party at age 10, through Christmas, model building, up to college drinking, but the common thread was Eagles football. Much of the humor was sports dependent & his major effect was to be cleverly outrageous. 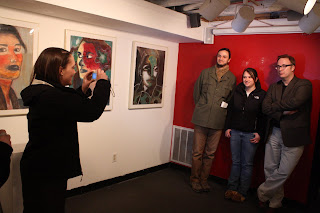 The "special guest," Daniel Nester, read a section from a longer piece, "Cousin Mike," about when he was 17 & his father left his mother. It was a touching & moving description of a late 20th Century family life.

This group is to be applauded for bringing these writers down from Academe & opening up their work to share with the community.
Posted by DWx at 8:36 PM