This is a "no-gimmick open mic" at Valentines (sometimes a "no-open-mic gimmick") presented by AlbanyPoets.com. There were a few of us poets with poems in our holsters & even a couple of poets at the bar who came to listen sans poems to read (are we that good?). 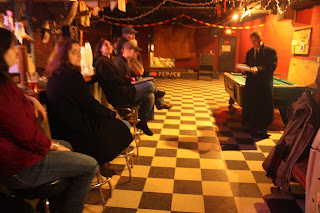 Thom Francis has the list in his head under a baseball cap with a "B" on it (for "Boss"?). I went first with a new, short line piece on the "ex-" titled "The Visit," then a "dream" poem & "Summer in California," which I like to read in bars. RM Engelhardt stepped up next with a poem he called "The Whores of Poetry," a litany/list bashing the poets who show up at open mics (note: not a good idea, this is your audience), then he read "Suture" (see my last Blog).

Dain Brammage showed up looking bit like the Unabomber but in a pleasant mood & read the first slam-style poem he ever wrote, "The Message Board Troll" in Dr. Seuss sounding rhythms & rhymes, then a piece about meeting a woman "At the Jazz Club."

Other interesting poets, mostly female, at the bar just shouted encouragement to us guys & made us feel, well, manly, I guess.

This happens -- or not -- on the first Tuesday of each month in the rock club known as Valentines on New Scotland Ave. in Albany, about 8PM -- look for the scruffy characters at the far end of the bar.
Posted by DWx at 2:06 PM

Not based on anyone in the poetry scene or audience Dan, based on mixed samples of people, types of people I've seen ~heard read over the last 18 years or so of open mics. ; ) !