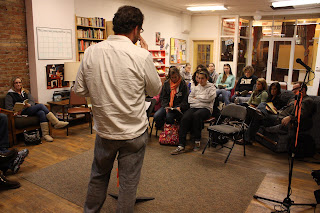 A packed house at the Social Justice Center with Daniel Nester's class from the College of St. Rose arriving early for a session with visiting poet Nate Pritts. Our Muse for the night was the recently deceased Lucille Clifton, another great poet gone. But for the open mic Alan Catlin started us off with "Karaoke Killers," a poem based on a recent newspaper article. Tad Richards drove up with Victoria Rivas, our featured poet, & read a poem based on a title that Robert Frost never got around to using, "The Story of the Cigar Box & a Counter-Revolutionary" (somebody had to). Rod Aldrich's poem "When the Snow Never Stopped" was not a prediction, I hope.

The first of the night's student-readers from Dan Nester's class was Chelsea Surprenant with a poem "Recognizable." W.D. Clarke's poem was "a true tale," "The Fisherman" out with his dad, & an unexpected find. Another student, Kristen Bidosky's "Past & Present" was about herself. Daniel Nester's poem was about dopplegangers, "Poem for the Evil Twin Episode of Night-Rider." Melissa Dominguez, another student, said her poem, "Experience," "sounds darker than it actually is supposed to be," perhaps a metaphor about writing about pain. 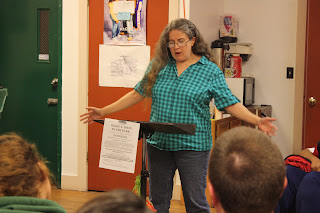 Tonight's featured poet, Victoria Rivas, read a program of poems about her teaching experiences, but began with a one about aging hippies, "I've been there…" She read from her manuscript Yo, Miss I Need a Pencil, poems about inner-city poor students, including a couple of pantoums with their repeating, over-lapping lines. Her poems were sad, funny, even angry at times & raise broad issues about poverty & the role of teachers in the education system. She touched on ignorance & lack of manners, teen pregnancy, & the innate creative sense children have in spite of the conditions they are raised in.

After the break I read my old poem "Sylvia Plath Slept Here" because she's still dead. The poet sometimes know as "Bird" (Alan Casline) read a retelling of an old native story, "The Adventures of the Great Hero Puloweh, or the Partridge in Algonquin Legends," from an old book. Sylvia Barnard's meditation on "Ash Wednesday" was only a day late. Jason Crane has a new book coming out from Foot Hills Publishing but "I Am Not an Indian" that he read tonight will not be in it. Bob Sharkey has been hibernating but was out tonight to read a poem ("Too Much Old Chat in Her") from a book he has been writing. This was Nan Thomas' first time reading here; her poem "Dance Lessons" was in 3, short sections. Terry Bat-Sonja said it was time for an erotic poem, "With Everything," & it was. 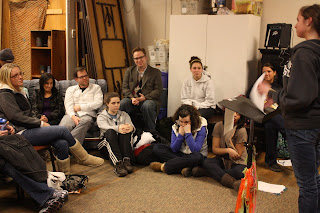 Another student poet, Melissa Gordon, read her "praise poem," her family & herself. Bless was back to perform his touching, funny & ironic poem about a homeless guy, "Man, Old Man." Ashley Martinez, another student, read "Imagination or Reflection" about then & now. The last of the students was Allie Fish with poem she wrote a few years ago about her younger brother who has autism, "Life with My Brother." Passion Poet is on her way to other parts of the country but stopped by to read her moving poem for her uncle James, "Viet Nam." Moses Kash III was back once again tonight to read "From Blood to Oatmeal" ending with Jesus Christ as the black Messiah. The poet Mojavi brought us on home reading a poem off his iPod, "Unraveling," like a tapestry.

Every third Thursday at the Social Justice Center, 33 Central Ave., Albany, NY, 7:30PM. More pictures from this event can be seen on my Flickr site.
Posted by DWx at 1:26 PM