It would take me an entire Blog just to tell you about my connection to poet, painter, short-story writer Rob Couteau, but suffice it say his father was my boss' boss when I worked for the State of New York in the World Trade Center in the 1970s, & I later connected to him when Joe Krausman attempted to prove to me that Jung's theory of Synchronicity was a crock of a lot of hooey. Joe called me a few days ago & said Rob was having a reading at a gallery that was showing his paintings in New Paltz. 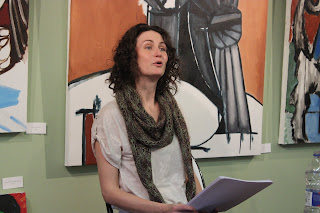 I arrived at the Van Buren Gallery, in a stripmall on Main St., just as the reading was beginning. But it wasn't Rob but his attractive girlfriend, Amanda Levin, who was reading Rob's poems as he videographed the reading. The gallery was filled, like Gertrude Stein's living room, with paintings elbow to elbow & head to toe, all Couteau's versions & variations of Picasso paintings from his project "A Year of Picasso."
Amanda read from Rob's forthcoming book of poems The Sleeping Mermaid, a mix of Picasso-related poems & other, more personal, works. The Picasso poems were descriptions of the master's paintings, many were in the room in the form of Rob's versions, such as "Portrait of Maria Therese," "Cat & Bird" & "Weeping Woman." "A Promenade with Walt Whitman" & "The 29th Bather" were homages to the great American poet. 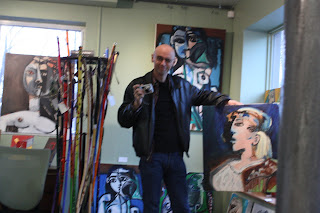 Some of the more personal poems recalled his childhood in Brooklyn, such as "The Country Boys" & "As a Boy in Coney Island" & the wonderful poem about walking with his father in the Brooklyn Botanical Garden, "Philosophy." "In the White Room" recalled his days in Paris & I found the strangely titled "Homeland" to be a love poem.

It was an unusual reading to have the poet in the room like any other member of the audience while
someone else read his poems, but it made for an enjoyable afternoon of poetry & art. Look for The Sleeping Mermaid when it comes out later this year.
Posted by DWx at 10:45 AM