A lovely evening, so nice that thousands of people were running through the streets of Albany in their underwear -- actually, the annual Corporate Run. Our featured poet, Elizabeth Thomas, came all the way over from Connecticut, with another CT poet, Faith Vicinanza. Tonight's muse was a West Coast poet who left us in 2004, Carol Tarlen, whose poems about work, workers & working were collected posthumously in Every Day is An Act of Resistance, published recently by Mongrel Empire Press in Norman, OK. I read her poem "Today," about having a day off with pay (something to consider the next time the corporations start bashing the unions).

Starting off the open mic was a new voice at the Social Justice Center, Joe Mangini, with advice in rhyme "If you're going to win this race…" Amy Nelson Hahn works with photos & ekphrastic poetry &, also a new voice here, got choked up reading "Fox Bones." 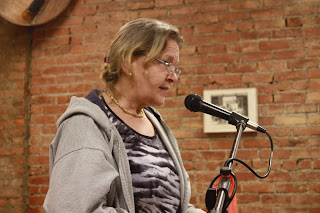 Faith Vicinanza is a Connecticut poet & publisher of poetry who accompanied our featured poet here to Albany; she read a tender, loving poem, "Confession," for her husband who died 4 years ago. Avery showed up with no paper & was excited to recite by heart "OM, a Kundalini Experience." Joe Krausman read a poem titled "A True Story," which he says so many of his poems are. Tess Lecuyer's poem, "What Riches May I Bring to Your Table," was started in April & she "just slapped a ending onto it". 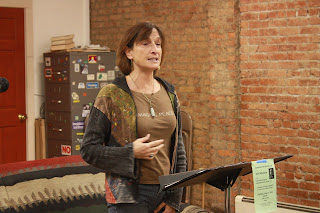 Our featured poet, Elizabeth Thomas started with "Poetry Is…" a collaborative poem by 4th graders in Hartford. A good way to start for this advocate of youth in the arts. She continued with her favorite poem, "Revelation", about a young student. "On Words & English Teachers" was about her addiction to words, the teachers who encouraged her, passing it on to her students, then "5th Grade Poetry Workshop." Her poem "Speak" was inspired by a woman in a poetry workshop whose son had been sent to Iraq, twice, but can't find a job. The sad, ironic "Hero" was read -- & sung -- in memory of Dave Van Ronk, & soldiers returning damaged. Another favorite, "Mother's Work," was a tribute to the birthing woman of the world, then she ended with another collaborative poem, this from a writing workshop at a Senior Center, "Home is the Place…" A stellar performance, one the audience loved & responded to throughout.

After the short break, we continued with the open mic & I read a new piece, "Lilacs, Again." Jim Eve, one of the hosts of the "Calling All Poets" series at the Howland Cultural Center in Beacon, was in town & read about being at a lousy poetry reading (not here). Bob Sharkey read, again, his poem "Cycles" that he had read at Don's open mic, the poem now revised from its earlier "wretched version" (his words). Elizag has been working on a new poem, "To the Company Making Shooting Targets that Look Like Trayvon Martin" (for real, unfortunately) & tried out the beginning. Moses Kash III got a ride from across the river & began with a ramble about his life in NYC, then struggled with a section from a book about the Obama family. The final poet for the night, D. Colin, appropriately enough read "On Being a Teacher, Part I: The Things I Can't Say," the next generation takes it on. Here's to all those dedicated, imaginative (& under-paid) people who are teaching our children & grandchildren, making the future. 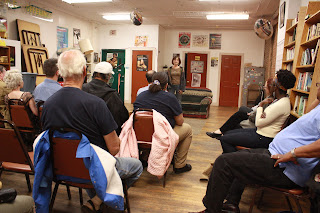 Join us at the Social Justice Center, 33 Central Ave., Albany, NY on the third Thursday of each month for a featured poet & many fine local poets who read in the open mic -- $3.00 donation helps pay the featured poet, helps the SJC & promotes other readings in the area.
Posted by DWx at 3:37 PM