Through one reason or another the last time I was at Caffe Lena for the open mic was in February -- it was good to be back. Our host, Carol Graser, started us off with a reading of Muriel Rukeyser's poem "Boy with His Hair Cut Short" then on to the open mic.

Joe Mangini started us off with a piece about his Uncle Joe & a '41 Chrysler, then "My Voice Can't be Recorded" (at least how he hears it). I followed with a poem for May Day, "Crane Alley" then the wise-cracking "Mother's Day." Barbara Ungar made a rare open mic appearance with 2 poems for her father, the first inspired by tonight's featured poet Djelloul Marbrook, "The Book of Sand" then her "first & last pantoum," "Becoming My Father's Mother." Kate McNairy first poem, "George's Girl," was about an encounter at a gas station, then one about baseball, "The Harbinger of Spring." It was Nick's first time reading here & he did well with "I Can't Write a Poem About Paris," & "My Dreams Like White Mist." 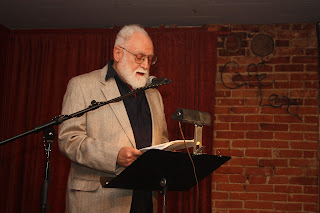 I had noticed tonight's featured poet, Djelloul Marbrook, earlier in the day at the reading by Harry Staley at the Writers Institute (see the previous Blog) but didn't know who he was until now. He read from his 2 books of poetry, Far from Algiers (Kent State University Press, 2008) & Brushstrokes and Glances (Deerbrook Editions, 2010), as well as newer poems. His poems are generally short (a page, or less in his books), directly & conversationally stated & focused on a moment in time, such as looking at himself in a mirror, or contemplating at line by William Carlos Williams ("My Last Civilized Moment"). They are often (cf. the poems in Brushstrokes and Glances) about the museum moment, less ekphrastic poetry than an aesthetic response to being there, such as seeing a Renoir at the Frick Museum, or a poem simply titled "In a Museum." His titles, also, can be like a poem itself, e.g., "The Doorknob Throbs with Desire," "Gussie Me Up," "Repairing the Herald Angel," or "Which of our Protuberances." I'm looking forward to reading his poems after hearing them flit by like butterflies.

Carol Graser returned us to the open mic with her fabulous working-class poem "Plastic Factory." Then Marilyn McCabe read a couple of (related?) poems, "The East Field" & "Eden, an Alternative Version." Barbara Garro gave us literal treatments of "Wild Stallions" & the Biblical tale of "Abraham & Isaac." I wondered if Carole Rossi Kenyon's poem "Graffiti Rant" (with its compelling phrase "secret zombie fortress") might be about Freud's Id? Charles Watts was funny tonight with a conversation on a plane, "A Poet," & his lament for fame "Why I Will Never…"

Debbie struggled with her laptop & the mic, but was able to get through a poem based on the screen names of friends, "Blushful Moon," & the quieter "Down by the Stream." Andrew Sullivan's one poem (did I miss the title or he not say it?) was based on a tennis tournament as a metaphor for love & life. Mary Eliza Crane had the award for coming the longest distance (from the State of Washington) & read the tender, funny "Dad's Pajamas." Ellen Finn read 2 historical poems from class assignments, "Little Rock Crises," & one on the 1974 - 1979 fight for bi-lingual education (now being dismantled). 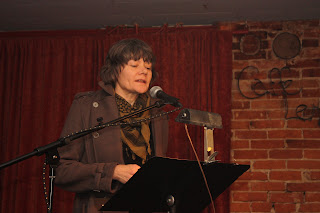 Ah yes, with Emily XYZ's comment on poetry readings in our heads, we headed out the door & I, for one, hope to be back soon. It's every 1st Wednesday at the historic Caffé Lena on Phila St. in Saratoga Springs, NY, $3.00, bring some poems, & always a featured poet (or 2).
Posted by DWx at 3:37 PM